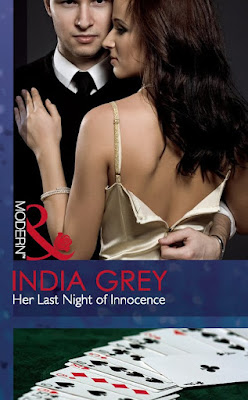 One of the latest out of Mills & Boon, fairly certain to be published over here as a Harlequin at some point in time:

World-famous racing driver Cristiano Maresca always spent the night before a race in the arms of a beautiful woman… Three years ago that woman was Kate Edwards, and her time with Cristiano awakened her to unimaginable pleasure. But the following day the untameable Cristiano had a near-fatal crash…and then Kate discovered she was expecting his baby… Now Monte Carlo is set to celebrate Cristiano’s return to the track. Shivering with nerves, Kate braves the paparazzi to find the man who set her body aflame – and tell him her scandalous secret… That Italy’s most notorious playboy has a surprise love-child!

Firstly, I tend to like the UK covers better but this cover made me rofl. Seriously, dude looks like a Head Boy from Harry Potter. Of course, most of the people on the covers of these things don't work for me anyway but I liked this cover better when they cut off part of his face as seen on the M&B website.

"Her Last Night of Innocence" is another foray by India Grey, a relatively new author first published by M&B in 2006 with "The Italian's Defiant Mistress". The only book of her's I've read besides the one in this review is "Powerful Italian, Penniless Housekeeper", which if I recall correctly didn't wow me but certainly left me open to try her other stories.

I have to say I really, really liked the prologue, which must be a 5-acorn beginning fer sure. We meet the hero—Italian race car pimp Cristiano Maresca—and the heroine—British bottled-water marketing assistant (I guess) Kate Edwards—and immediately jump into the action, which literally ends in flames and derails Cristiano's career.

Four years later, we discover Cristiano baked his ciabatta loaf in Kate's oven, resulting in a son named Alexander. Kate was never able to see Cristiano since the fateful day of his crash and has the chance to confront him now that he's re-entering the racing game. I liked how both of the main characters have a heavy personal demon to fight. Kate lost family due to reckless driving, which creates a conflict when it comes to her feelings for Cristiano. Meanwhile, Cristiano has esteem issues from a learning disability and on top of that is struggling to race again. He lost a small chunk of his memory from before the crash and it's screwing with his ability to race. Additionally, that particular chunk of memory was super-important and without it he remembers virtually nothing of Kate or their magical evening.

Side characters like Kate's boss Dominic and Cristiano's lady-doc Fournier do their part to move the story along without feeling forced upon us. The moment when Kate becomes sick at a particular "art display" is strong and when Cristiano kisses Kate and she believes he remembers her was one of the top genuinely heart-breaking moments I've read in one of these books. Kate's urgency to return home when Alexander gets sick was also well written. All that said, this book isn't without its flaws.

It was maddening that during Kate's subsequent stay with Cristiano, telling him he had a son took priority under getting herself some hot Nascar lovin'. It was only through a misplaced letter—which you know is getting misplaced the minute the idea of writing down a secret is mentioned—that Cristiano follows Kate and meets his son. From then on, it gets a little... well... boring actually. I found myself struggling to read through the rest of this about as much as Cristiano would.

Cristiano's vampish assistant Suki was also underused. I really wanted the claws to come out with her and she was kinda "meh" throughout the whole thing that I saw no point in including her in the first place. I saw the stepping stones for some high drama in her character as Suki was at least somewhat infatuated with Cristiano but that never came to fruition other than she MAY have told a little lie. It would've rocked if she had somehow gotten that letter first but alas, she doesn't do much but snark here and there and help move Cristiano's career forward.

More drama also should've come into play with Cristiano trying to win Kate's love. As I've seen in a lot of these books, the heroine becomes a bit of a jaded pill (and rightly so) but the hero's all "I'm here now, deal". I wanted him to be more dashing and romantic! He has his jerk-modes at times and it makes him difficult to love. There was also a tidy helping of father-son mush between Cristiano and Alexander that will make fans of that sort of thing go "AWWWWW" but made me kinda stick in my finger in my mouth. I don't read these books to read about keedz.

For those that may be wary of the whole race car romance thing, the racing and the cars of said racing really take a backseat to the story so there's nothing to worry about on that front.

In any case, I felt this book was among the more decent ones I've read. Despite that it lost me in the last few chapters, there are parts of it that are pure gold. While it doesn't make my keeper list, I'm giving it a solid 4/5 acorns and will definetely check out more by India Grey.