Book Review: Stay Through the Night 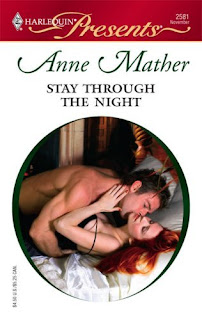 Liam Jameson is a world-famous writer of paranormal thrillers. But fame has its price, and now Liam lives reclusively on a remote Scottish island. Then Rosa Chantry knocks on his door and throws his world upside down. His desire for her is strong, but his conviction that he cannot satisfy a woman is stronger. But Rosa is persistent, and so is Liam's need for her. She is determined to ease his fear that the past has robbed him of his power as a man...

Okay, so this book's a bit older [from 2006] as I tend to try to review the more recent fare. I stumbled upon it and I figure I may as well blog about it since I haven't been reading all that many Harlequins of late. It's by Anne Mather, who also wrote "The Greek Tycoon's Pregnant Wife" which did make my Favorites list so I was open to reading another one.

Liam Jameson is a male Anne Rice who was attacked by some bat-shit fan who apparently scarred him everywhere but on his hot face. Rosa is an ignorant, too-thin school-teacher with flame-red hair, cheated on by her slimy ex-husband Colin and easily given to wild goose-chases due to her whining mother who favors Rosa's younger sister Sophie. Loose, spoiled Sophie is a Jameson fan and when she disappears, Rosa is pressured into following a noodle-limp lead straight to Jameson's castle.

I usually like the idea of a marred hero but I got the feeling Liam fell under the whole "hey, I'm scarred but not scarred enough". Although this book cover is less dumb than the usual lot of them, that dude in the picture doesn't have a single mark on him. Liam wears long-sleeved shit because he doesn't want anyone to see his scarred arms, why don't these damn covers ever get things right? [Also, he looks like he's biting the heroine but I'll just leave that as being purposeful since brother there writes wamper novels.]

I found it odd that Liam has some real insecurities about being physically cut up yet the heroine's all caught up with his good-looking face and gorgeous eyes. I know these sorts of books are a fantasy but it comes off a bit of a contradiction, no? Especially when he's hesitant about showing her his body and she's all "ITZ OK I LUV U NO MATTER WUT" about it. Doubt you'd be saying that if he had a donkey's face. While having Rosa have to actually go through more of an acceptance of Liam's scars would have been good, I'll just assume the word limit for the book is why we had to kinda rush on through that.

Liam, at least, isn't the standard romance alpha hero who jerks-jerks-jerks all over the place, calls the woman a whore, and then does three to four sentences of groveling and bad explanations before expecting to be taken back. Liam is just understandably grumpy about having his privacy potentially invaded, generally jaded by women after being jilted by his fiancee, and confused about his attraction to a woman he barely knows. I found him amusing and refreshing.

While the book does place Liam and Rosa at odds at times, as what must happen in most romances, it is the tension of two insecure people. It is not done with bile or some action that might overwise be unforgivable like an affair or a hidden baby or stealing daddy's company. The result is that it never made me want to bang my head on the keyboard and made this book a very nice read.