I first heard of this show over ten years ago while taking a Japanese course at my local community college. Several of the other students loved it but I didn't get the hype. I was initially (ho!) put off by the artwork and subject matter.  The characters looked goofy and, well, street racing?  Why would I want to see a show about street racing? Then, during the 2015 Super Bowl, I wanted something to watch. (Texan that doesn't do football: ho-ho!)  I noticed three seasons of Initial D were available dubbed by Funimation on Sony's Crackle service. (It's not there anymore so don't bother. Crackle's really—ahem—cracked down on their anime offerings.  Ho ho ho!) Having nothing to lose and wanting to drown out my neighbors, I turned up the TV and started the show. Less than half an episode in, I was hooked. 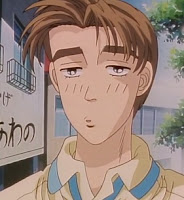 The main character is this guy: Takumi Fujiwara, the meh-faced teenaged son of a local tofu shop owner. He makes tofu deliveries up and down the roads of Mt. Akina (fictional stand-in for Gunma prefecture's Mt. Haruna) for the family business using his father's Toyota Sprinter Trueno a.k.a. dat hachi-roku. That the car's an AE86 apparently means something in their universe but not in mine since I'm not a car person. No, you don't have to be a car person to watch this show. The characters explain all the important shit for you. While Takumi initially (ha!) has no interest in the local street-racing scene, his natural mad drifting skillz end up catching the eye of twenty-one year old Keisuke Takahashi.

Keisuke's a member of a visiting rival team—the Akagi Red Suns—and the younger of a pair of good-looking, rich, popular and uber-talented racing brothers. The show tells us the Takahashis are also called the Rotary Brothers but then exactly no one ever refers to them as such. They also have a cute female cousin who is sadly cut out of the show.  Anyway, the Red Suns planned on wiping the floor with the local racers the Speed Stars, but tofu-schlepping Takumi is someone Keisuke can't immediately beat.

The dynamic between these two is probably what I enjoy the best and I wish First Stage had more of it.  Takumi's general apathy clashes wonderfully against Keisuke's firey personality but they don't interact nearly enough.  The series then follows Takumi's emergence onto the street racing scene which includes multiple battles with various challengers, a bit of showboating, and a bit of love in the air, too.  And also a singular panty shot.  Oh course, that was the scene my dad walked in on.  ¯\_(ツ)_/¯

Now "First Stage" refers to "Season One."  I love First Stage and it really feels like a complete story. It even got re-adapted a couple of years back as three movies with completely different voice actors. Along with the two English dubs that were done, that means each of the main characters has four different voice actors. (Not counting other language dubs, of course.)  If you're a viewer that follows Japanese and/or English voice actors, there's someone for you in each version and you'll probably recognize a bunch of the names here without me listing their other credits.

I actually prefer more of Tokyopop's casting choices—except for Takumi's dad, I mean, were they trying to pretend to voice a muppet or what—but they really fudged things up with all of their dumb changes.  As was standard with lots of 90's era dubs, Tokyopop tried to make Initial D more marketable by adding weird lingo, completely changing the originally poppy music into wannabe rap/hiphop junk, visually altering the races the way your kid brother would, and giving a bunch of the characters new or altered names.  Takumi, Keisuke, and Ryosuke become Tak, KT, and Ry. Those are the names they went with: they renamed them tack, Katy, and rye. Why not just go with Terry, Keith, and Ryan or something like that? It's like they wanted to keep their names but not keep their names, I guess. In one scene, Iketani—renamed "Cole" or all things—even refers to "KT" as "Keisuke Takahashi." So his name's still Keisuke Takahashi, he just doesn't go by, uh, his name? Bwuh?

Also, the altering of the races and music just takes a bunch of the tension and suspense out of it. Show me someone who doesn't get hyped when "Get Me Power" starts up before Takumi drifts (♫ Do it, baby. Get me power! ♫), and I'll show you a fucker without a soul. You know how Rocky IV is pretty much a bunch of music videos strung together? Now let's cut out all the music and re-edit all the montages! Tragic, amirite?

As a result of the above bs, there was a mostly negative reception for the Tokyopop dub and it makes me think maybe I got into Initial D at the right time: when Funimation had already picked up the license and put out a faithful dub and sub release. Bear in mind that if you poke around the Internet for an English dub, you might end up with the older dub. Unless you go to YouTube where Funi has the entire First Stage subbed for free. If dubs are your style, you'll find four free dubbed eps to try out as well. Funimation's version, as of this writing, is available on DVD for $17 and change over at Amazon.

Now, there are subsequent stages of Initial D after First Stage: Second, Third (which is an ova), Fourth, Fifth, and Final along with two Extra Stages and Battle Stages. You'll notice tho' I specifically list First Stage as my recommendation. Honestly, the quality declines in each subsequent stage. First Stage really feels like a full story with a beginning, middle, and end. Everything that comes after just feels like sequelitis even though the story continued for a long-ass time in the manga. I mean, Takumi comes into his own as a street racer so what's left in the other stages? Lots of neat folks we meet in First Stage really get pushed aside later. I wanted to see those guys improve or at least provide further racing commentary and interaction with Takumi, but the show proceeds to care about them less and less. There's also a radical art shift.  In Second Stage, the character of Ryosuke actually becomes a doppelganger to the main character of Takumi. It's super creepy!

The first two pics are Ryosuke Takahashi and the last one is Takumi. What-what. Why did they mess with the first design? It was perfect! Meanwhile, his brother Keisuke becomes more and more Super Saiyan. And they aren't the only ones that get changed. Shigeno's original artwork, as dopey as it can be, is most faithfully adapted in the First Stage. I do wish the show went even further will making the characters visually as expressive as Shigeno does. I really came to like the duck mouths, the smug faces, and the beady eyes. Shigeno can render a smug face like nobody's business. 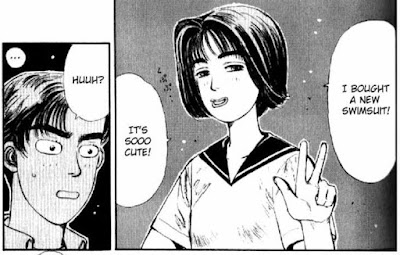 Unfortunately, as little as First Stage adapts his artwork, the further stages do so even less. The character's faces actually get stiffer and stiffer and by Fourth Stage, it's like watching cardboard talk. This is where Funimation stopped dubbing, with the last Tokyopop dub at the end of Stage Two. Really, nothing of value is lost. You're fine proceeding as far with it as you like. For what it's worth, there's still some cool moments, some laughs, some awesome music and some nail-biting races in the later stages. None of it comes together like in the First Stage. Probably not a popular opinion, but there ya go. By the time I got to the end of Fourth Stage, it felt like enough. If you want the rest of the story, you'd probably be better served reading the manga. And certainly, if you're a viewer looking for a more modern-looking, slicker anime with trendier music, look no further than the three movies.

Okay, at first, I was really pissing on about the movies not having the original voice actors from the '98 series or any Eurobeat music. Plus, being movies, they condense a lot of material. The movies also keep the characters pretty stiff-faced. Compare a scene from episode 1 of First Stage with a scene from the movie adaptation:

The '98's artwork gets more "love points" or whatever from me. It just looks more expressive and "snug," I guess. The movie's artwork still has merits of its own: crisp, with clean lines and bright colors. I also got a better feel for the races in the movies. While the '98 version brings fun with the Eurobeat, these races felt more dramatic visually. Just look at this lighting. 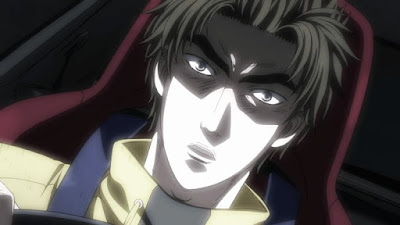 And with the '98 series, it was pretty easy to forget these dudes were racing on dangerous mountain roads.  Sometimes it felt like flat, straights with nothing to them. The steepness of the mountains, the lack of proper visibility, the hairpin turns, and the spectator pov all feel more accurately rendered in the movies. Honestly, while watching some of the '98 series, I'd wonder how the hell the spectators could even see what was going on with the race. The movies are even a bit more faithful to the manga in terms of sequence of events, with the '98 version inserting a few races out of place to fill up the episode count and reach the end with the race it wanted to.


The movies really endeared themselves to me. Although different, the voice actors and music are still pretty darn good. Cliffnotes Initial D is still a cool story and probably plays better for the younger crowd and n00bs vs. the nostalgia crowd. The latter had such a hard time accepting the shift that there's actually fan-made Eurobeat editions. No complaints, but I did actually come to like the new music almost as much as the Eurobeat. Here's one of the featured songs:

Anyway, lots of personality, thrilling races, humor, and snappy tunes make Initial D a treat and one of my favorites. Definitely worth you checking it out. Either or both versions.
Posted by B E C K at 5:49 AM