Why Capital vs. Thomas is a load of horseshit. 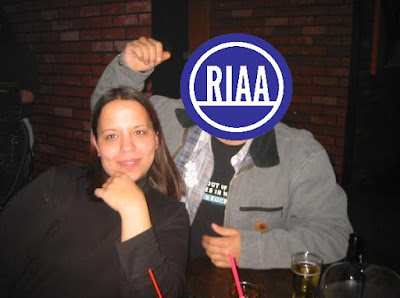 "Lady, look out behind you!"
If you need some reading materials on the subject, you can go to either Single mom can't pay $1.5M song-sharing fine or The RIAA's latest victory over Jammie Thomas-Rasset. Here's an older article about the matter: Thomas testimony ends with tears, anger, Swedish death metal.

The gist is that a Minnesota woman named Jammie Thomas-Rasset was using a file-sharing application, Kazaa, to download music. The nature of peer to peer file sharing means that while you download something, you are helping others download the same file through whatever pieces of the file you possess while downloading. Thus, whether you mean to or not, you are also sharing music. She apparently did this with over a thousand songs. After not paying the amount demanded by a desist letter, also known as toilet paper, the case went to trial. Over the years, she had been found liable for various amounts, with the latest amount being $1.5M. Despite the emphasis that Thomas-Rasset is a repeat offender, this lawsuit, formerly Virgin vs. Thomas, is not for damages from thousands of songs. It is only for 24 songs:

Am I the only one who finds the fact that a song called "One Honest Heart" is up there funny? Anyway, with the latest settlement, that is a staggering $62,500 A SONG. Even half of that, $31,250, is grossly unreasonable. 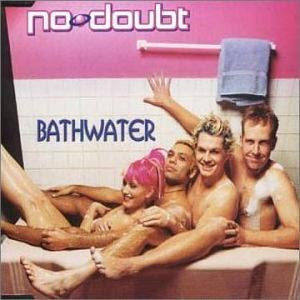 Let's take an example: "Bathwater" by No Doubt sells for 99 cents on Amazon. (I won't even see if it's the same price at iTunes because iTunes is a piece of crap.) Rounding down, that is 31,565 people that Thomas-Rasset would have had to share "Bathwater" with to even make the latest settlement halfway logical. This still makes some big assumptions though.

1. Would all 31,565+ people including Thomas-Rasset have ever bought "Bathwater" in the first place? I guarantee you that if all of those people were ordered by the court that they would have to pay for the song or get rid of it, over half of them would hit the delete key. Not everything that is pirated is something that ever would have been purchased to begin with! Hey, I like the song, don't get me wrong. But the RIAA, Capitol, and all of those other monkeys need to accept the fact that shitloads of people would rather not have a lot of music than pay for it. Therefore, what money did Capitol lose from the people who NEVER would have bought it? And why should Thomas-Rasset be liable for it? 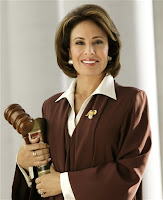 2. How do you prove that she even shared it with 31,565+ people? Now I'm no lawyer, but shouldn't there be a burden of proof here? Can they just pick a number out of their ass? I mean, they were willing to settle for $5000 dollars back in August of 2005. Why isn't the figure Thomas-Rasset is supposed to pay not $5000 plus court costs or something. In what universe is it okay for that to balloon to $1.5M? Shoot, I watched Judge Pirro today and some woman was suing her ex for a car that she had been in the process of selling to him. Her original price was $800. He paid $300, but not the rest. And this lady wanted more than $500! Judge Pirro called that shit out and I'm calling out this. RIDICULOUS, friend. No effin' way.

3. How do you know 31,565+ people didn't already own "Bathwater"? How many of these people already had "Return to Saturn", "The Singles Collection", or the "Bathwater" single and for whatever reason just wanted a digital download from somewhere. By saying Thomas-Rasset is liable for "Bathwater" being shared without compensation, the courts are also saying these people should have bought a digital copy from Amazon or Asstunes of SOMETHING THEY ALREADY OWNED. I mean, we're still allowed to rip our CDs for our own personal use, aren't we? If my copy of "The Singles Collection" is at home and I'm a friend's house and want to sync "Bathwater" to my MP3 player, why the hell should I have to pay AGAIN? What's wrong with just snagging it online? Not to mention the folks that liked "Bathwater" so much they went and bought a CD or digital download. Where are they in this equation? Yes, they initially took it for free but is a subsequent purchase 100% meaningless? Furthermore, if my computer, MP3 player, or copy of the CD is stolen, shouldn't I be able to replace a song I've already bought?

Now this case is too complicated to make proper points on every little issue. Although Thomas-Rasset has been accused of playing the "single mom can't feed mah keedz" card, I have no idea what bankrupting this woman is supposed to prove besides that Capitol and the RIAA are insanely greedy and effin' nutso. She stole music, she got caught. And people are like, "well, if she shoplifted a purse, blah blah blah". Digital media is not comparable to shoplifting a goddamn purse or a dress. People who want a song but don't want to buy it can rip an MP3 from a friend's CD, get an MP3 from a relative, or rip a CD from the library. You can't borrow a freakin' purse at the library. Purses don't have the ability to multiply beyond the realm of control. Get real, folks.

One of the comments for the MSN article said something like if Thomas-Rasset had shoplifted all of the CDs these songs came from, the penalty would be NO WHERE near $1.5M. And while peer to peer file sharing has the ability to share from millions, the fact is that millions who are stealing songs like "Bathwater" are not ALL using a single source like Thomas-Rasset for all of their music needs. It's like they're trying to make her pay for every single theft of the damn songs.

I do not believe it would be correct to merely find her liable for the initial cost of the songs, around $24. If she perjured or did anything else to affect the outcome of this case, she should be fined. Penalties and violations of the law are due for the thefts; Okay, I get it. But in a lawsuit for 24 songs, over a million bucks in damages is ass no matter how you slice it. There's no way that many people at a time want "Bathwater" or any of those other songs and that they all happened to take it from Kazaa AND from Thomas-Rasset. The MSN article points out that while the legal minimum is $750 per infringement, Thomas-Rasset has been found liable for well over that amount multiple times.

When a reporter pointed out that three juries of her peers had decided that she should pay well above the minimum, she said there's "no rhyme or reason to the numbers" but she respects jurors for doing their jobs.

Frankly, stuff like this leads me to believe that this woman is an idiot and "three juries of her peers" were in fact three juries of other idiots, which makes perfect sense. A jury is not doing its job if it truly believes this result is just. There are killers that aren't found liable for this much in civil damages for taking a life let alone a tubby octomom-wannabe taking some music. Is it really so horrible that she needs Gwen Stefani to sing about washing herself "in your old bathwater" to forget that she's the overweight mother of four kids who works as a natural resources coordinator? And she's Native-American so, like, didn't America already take this woman's land? Can't this shit just cancel each other out?

Then there's this tidbit from Cara Duckworth of the RIAA:

I have hard goddamn time believing that Thomas-Russet cost No Doubt $187,500 ($62,500 * 3) in damages, let alone that she caused their songs to fall into the hands of millions of people. This isn't the ending to the last Harry Potter book where no one else had something that was distributed to the detriment of the source. "Bathwater" was out for a good five years before Thomas-Rasset decided to help herself to a free copy with many other songs on the list of 24 out for far longer. One of the millions of people who BOUGHT "Bathwater" was how Thomas-Rasset got the song in the first place.

And if Capitol and the RIAA are so concerned about "the individuals" who make the music making a proper living, why don't they give Gwen, Tom, Tony, the rest of No Doubt, their mixers, whoever else worked on and marketed the song some of that cheddar that was instead spent on this stupid lawsuit. If Thomas-Rasset had paid the initial $5000, how much of that would have even made it to Tony Kanal's wallet? Why doesn't Capitol spend money looking for ways to profit off this digital wave they have no hope of stopping instead of trying to get money from people who can't pay? I mean, Thomas-Rasset couldn't buy the music legally so what makes anyone think she can pay for it thousands of times over? This isn't teaching thieves a lesson, this is just being cruel and unfair to one who got caught.
Posted by B E C K at 10:42 PM