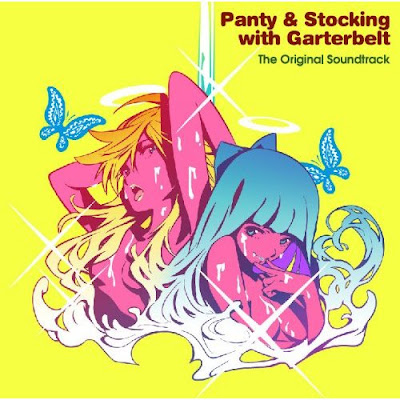 The most awesome anime of 2010 was "Panty & Stocking with Garterbelt", hands down. It was awesome, wacky, filthy, stylish, and completely different from a lot of same-old/same-old animu crap that's been chugging its way from overseas. And at thirteen episodes long, it didn't wear out its welcome either. For you poor souls that have never heard of this great fucking show, the premise is that two fallen angel sisters are trying to earn their way back into heaven by destroying ghosts and getting coins (called Heavens) in the process. Panty is a hot-headed nympho while Stocking is a goth-lolita, bondage-loving, sugarholic. They are guided by a bad-ass priest in a 'fro called Garterbelt and sometimes helped by a green, retarded, Gir-rip-off named Chuck. 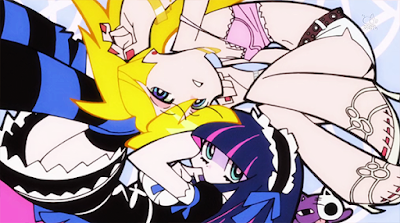 But this post isn't about the show however much I should've made a post about it. Because one of the raddest things about Panty & Stocking was the electro-dance-house soundtrack. By TCY FORCE produced by M-Flo's ☆Taku Takahashi, featuring TeddyLoid, Hoshina Anniversary, Aimee B., Booty Bronx, and a bevy of other peeps, you don't have to know who the fuck any of them are except for the fact that they make some boss tunes.

My only gripes…? Firstly, the opening music, "Theme for Panty & Stocking" is TV size at thirty-two seconds long. I would have LOVED LOVED LOVED a full-sized song.

Second, the sweet ending tune "Fallen Angel" with the vocals of Aimee B. (who some of you may know from the musically good but otherwise horrid "Devil May Cry" anime) is nearly sixteen minutes long! Why is that a problem? Well, the song itself is nowhere near that long. It's clocks out around four minutes and after about ten minutes of DEAD SPACE, we get a teaser about a possible second season. Come on, now. This ain't a record. People want to rip and keep this music. What was so wrong with having the song at the proper length and the teaser-thingy as its own unlisted track?

Third, it seems like there might be some music that didn't make the soundtrack which is bewy, bewy sad. 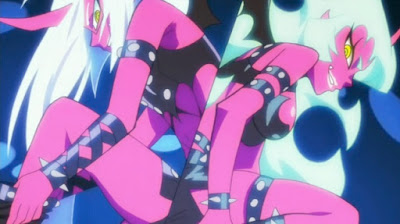 But the "bad news" ain't all so bad. The disc is still a great listen over-all. "Theme for Scanty and Knee Socks" wins the grand prize tho'. That track is tiz-zight! Leave it to those demon sisters to steal the show again.