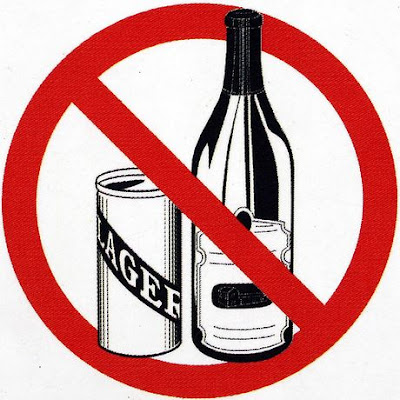 If anything has added to my "lame" status over the years aside from my lazy excuse for fashion sense and generally quiet, anti-social nature, it's been when people realize that I'm pretty much a teetotaler. I swear, it's like you grow an extra head when you tell people you don't consume alcohol. You're a leper and no one wants to touch you. You can't "loosen up". I've been shown pictures of people boozing away and been "regaled" with stories of them vomiting and driving drunk and I'm supposed to clap and award these losers medals.

You see, I'm clearly not "living life" or so I'm told. I find this ironic considering the people who tell me that have been proven to drink to ridiculous excesses, presumably to escape the very life they so claim to luuuuuuuuuve livin'. If you need liquor to get over your inhibitions that damn badly, I hate to break it to you—okay, actually, I'd luuuuuuve to—but you haven't made any progress. You're like an old man and his viagra: needing a dose of something-something to get the job the done but still pathetically and woefully impotent.

Anyway, I digress. The fact is I just don't like it.

1. It tastes like crap. I like to call liquor "Bath & Body Works" because it tastes like some body spray I accidentally tasted. (HA HA ho, no.) I like to taste alcholic drinks out of pure curiousity and frankly I haven't found anything I'd consume on its own without using it in food or something. You may as well tell me you eat paprika by itself.

2. It ruined my birthday party. I was a little kid and a bunch of my relatives came over and got drunk. At a CHILD's party? I mean, I'd go to school and learn the dangers of alcohol and how it's killed people and then I get to celebrate my eighth or ninth or whatever birthday with a bunch of booze-hounds. That put a worse taste in my mouth than actually tasting the stuff as an adult. Beer and cigarettes do not belong at a child's birthday party and any time I see them there, I die a bit inside. And I thought getting packs of notebook paper one year for a birthday present made me a bitter pill.

3. No respect for moderation. "WHY CANT I HAS A GLASS OF WINE?" First of all, no one's talking about a glass of wine, stupid. This is clearly about people who just chug it away like it's water that's gonna win them a Wii, conveniently forgetting that woman died. Anyway, do you think me or anyone else for that matter gives a rat's ass about someone who only has a beer or two or sips a glass of wine with their dinner? Don't be retarded.

4. It's a ridiculous status symbol. Like a douchetastic pair of over-priced sunglasses or a groovy national landmark, people can't resist posing with it in pictures with a smug sense of pride. And then they actually publish these online! Do you see me smugly posing with a gallon of milk or a quart of juice, dumbass? You DO realize it makes you look STUPID, right? And unless you're an avid wine connoisseur or the owner of Budweiser or something, you don't need to pose with any alcohol.

5. It makes you indignant of the law. My favorite one? When people are all bitching about going to jail or paying fines on multiple DWI offenses. "Damn the law! Trying to save innocent drivers by punishing me! It'soooooo unfair!" BAAAAAAAAAAAAAW.

6. It ruins sober people. I've met a lot of funny, smart folks at work and school. Or at least I thought they were. Get these folks liquored up and watch out, bro! "OHHHHH, but I'm just livvvvvin' life." Sad, because I liked you before you turned into a babbling, potato chip-spewing drunken asshat with no self-respect. Lots of awesome actors, singers, and talented people wasted by this crap. Come on, you know it. Rehab this and rehab that.

7. Point, stupid counterpoint. "But they do it in EURRRROPE!!" Then solve both our problems and MOVE TO EUROPE. "I can DIE for my country but I can'ts drink!" The fact that you compare the lost lives of our military men and women in service to our country to your legal inability to get hammered shows why you have not been deemed mature enough to drink. "Why can't I HAS A GLASS WINE?" Because in loads of lovely, retarded internet arguments, it always comes down to a damn glass of wine. Hey, I think we all know it's not about "a glass of wine" so shut-up.

8. It smells... like broken promises and dreams of Christmas past.

9. I do not feel safe on the roads on weekend nights. I really don't do it and it makes me a bit apprehensive when I am out there. "Fifty-four percent of all teen motor vehicle deaths occur on Friday, Saturday, and Sunday. Thirty-five percent occur between the hours of 9 p.m. and 3 a.m." And those are just teens! Boo! I don't wanna die, homes.

10. My uncle almost hit me in the head with a plate. Drunk people + repressed problems is the recipe for a made-for-tv movie on Lifetime. Tons of people with crappy lives tend to turn towards firewater, denying the fact that once they leave Beer-Narnia or wherever they go, their problems will still be waiting for them. Hey, I haven't seen anybody's life improved by the stuff either.

11. People destroy themselves and then want free organs. Truth, I tell you, truth! These people whine and whine about dying and needing a kidney or a liver after forty years of hard drinking and get all bitchy when you won't let them farm you for parts. Then they get their whatever and don't curb their bad habits. Aren't there better people these organs can go to? If you want to destroy your liver, fine, but don't make it everyone else's problem. Don't make people pony up for your medical care when you didn't give a damn about your body in the first place. Speaking of which...

12. It wastes money. (1) How much more government bread are they gonna spend on "prosecuting" spoiled rich jerks when John Law doesn't even mete out any real punishments? Let's just leave Lindsay and Paris alone. Then, when they hurt someone or destroy property, sue their asses for a megaton of cash. Rehab is a joke. Jailtime is a joke. Ankle bracelets are a joke. Stop wasting tax payer dough unless you're serious. (2) If you're so damn poor, stop buying beer and pay your rent! If I bought $50 worth of gum each week for myself, you'd think I'd have a serious problem, right? $50 worth of beer isn't any better.

13. Ridiculous level of public acceptability. In an era of "Jackass" and other MTV garbage, it's no small wonder why these antics are lauded. There is no sense of shame anymore. In fact, it's a worse crime to be a virgin or live at home than it is to have a drinking problem. This is because people who drink, like shoplifters and constantly pregnant welfare moms, are just "livin' life".

EDIT: Forgot one! #14. Free license to act like a jerk and talk trash. But you didn't mean it because YOU WERE DRINKING. Hey, you chose to drink sober and you probably really think those things anyway, so you meant it by proxy. Prefacing insults with "He's a really nice guy but" don't help either. Especially when you then crack a joke at his expense and expect the whole table to laugh. Boo.