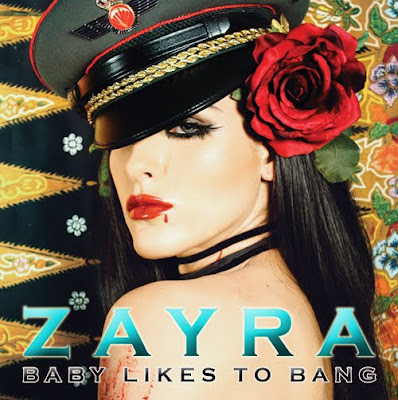 Zayra, a.k.a. Zayra Alvarez, you may or may not know as a contestant on “Rock Star: Supernova”. It was a 2006 reality music competition in which a bunch of dinosaurs of varying talent and fringe association with your father’s favorite rock bands decided to form a supergroup douchetastically using a pre-existing band’s name. Singers compete for this unique opportunity to front the band, release a flopped album, and never be heard from again.

Zayra was best known on the show for being the fricken hot Puertoriqueña who weirdly spun around on stage in electric blue catsuits and the like while she mercilessly butchered beloved 80’s classics like “Call Me” and “867-5309/Jenny”. Because I take shit too seriously, I absolutely hated her on the show and crossed my fingers that she would just go home. For anybody who watched the show, you knew she didn’t have a chance in hell. Yet, that is the brilliance of Zayra: she got on a show she clearly did not belong on and got shitloads of publicity. Hell, I knew people who merely watched to look at the woman’s outfits!

After the show ended, I’d kinda “check in” with past contestants and see what they were up to and whether or not they released any new music because I’m a curious slob like that. I looked up Zayra, too, and--besides the re-release of her Spanish album, Ruleta--she was in a new band called Pretty Baby, later renamed Cobralush. I heard some samples from them and lemmee tell you, that was good stuff. Cobralush’s music was in the vein of the electronic dance sounds of “Le Disco” by the Shiny Toy Guns, who Cobralush even performed with. 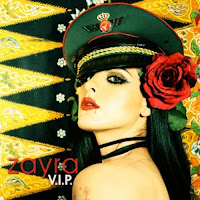 I don’t know what happened with Cobralush but Zayra then appeared as a solo artist. When I checked out her website, I was hella excited for her new music. (Nothing against Ruleta, but it’s not my thing.) “Baby Likes To Bang” was preceded by her single “V.I.P.” that was packaged with three remixes. The remixes are decent but I found they wore out their welcome pretty fast. My preference is actually for the Dave Audé Radio Mix that clocks in under four minutes and, you guessed it, it ain’t on there or here.

On to what is there trackwise on "Baby Likes To Bang":

#1 “Baby Likes To Bang” – The eponymous track set up to be the next single complete with video and remixes. Can’t wait. I managed to hear this one and “Super Sexy Miniskirt” in full length last month--search "Zayra" and "Rainmaker" and go to "Press Assets"--I immediately fell in love with them. This one has a really cool beat to it.

#2 “V.I.P.” – In the interest of full disclosure, I did not buy this song or the remixes that came on “Baby Likes To Bang”. I already bought “V.I.P.” as a single and couldn’t bring myself to double dip. Sorry, Z. Still completes the album if you didn’t manage to snap it up the first time around. It peaked on Billboard’s Dance/Club Play Songs at #5. Makes fun of celebrity club kids with a dance beat and some very clever lyrics, too: “We got no dreams, we got it all. Our future’s set, don’t need a break. Don’t want my picture in a frame, I gotta have the front page… Love to inhale, not swallow. We’ll never know rock bottom.”

#3 “Super Sexy Miniskirt” – When I first heard this I thought “oh no, a slow one” but it works, it really freakin’ works. Kinda one of those tracks you’d chill to. I hope this becomes a single but it might not be fast-paced enough. Great song.

#4 “Feel Good” – This is really the only song I consider a 100% new since I heard just about everything else already. Not a stand-out track, but not a throw-away one either. Something about the background music reminds me of a really hip, lost Super Mario Brothers level. You could totally mix in mushroom and star sound effects and it wouldn’t be out of place at all. That’s not a bad thing.

#5 “Liquid D” and #6 “Violent Man” – I originally heard these as Cobralush songs and immediately liked them. I love that they’ve been given new life on “Baby Likes To Bang”. They’re both slightly different from the Cobralush versions but neither is better or worse. Frankly, I’m just happy the two best Cobralush songs got released.

Here’s the point where I’m supposed to move on to the remixes which make up the other half of the album. There are five “V.I.P.” remixes, with two—possibly three—of them being ones previously released on the single. The Dave Audé Club Mix and Mike Rizzo Funk Generation Club Mix for sure, still not sure about the DJ Paulo & Alain Jackinsky one. None of the remixes are neat little radio-sized ones either. Several remixes clock in past seven and with one almost at ten minutes. That's just a bit too much for me and the samples did nothing to encourage me. There’s also a “Super Sexy Miniskirt” remix but I really needed to hear the full-length track on that one as the samply bits on iTunes and Amazon didn’t sell it. I can always change my mind and go buy it later I suppose.

I think this release would have been better served using radio sized remixes of the three remixer tracks that already appeared (someway or another) on "V.I.P." and giving the other remixes room to shine. Or better yet, giving us a couple more tracks to chew on. (But then I'm just being greedy.) Otherwise, this is a solid release. For anyone who doesn't already own "V.I.P" and the remixes, this is a steal at--as of this blogging--$8 over at Amazon.com.