"On Leather Wings" was the pilot episode of Batman: The Animated Series although it was apparently the second one to be broadcast after the first part of "The Cat in the Claw". Don't ask me, I was twelve. It first aired in September of 1992.

I'm certain I watched it when it first came out and I don't remember what my thoughts were on it. I must have liked it because I saw every Batman episode up until the art changed in Season 4. [I'm remedying this as you read.] I remember hating the look of it but certainly not because of Bruce Wayne. Shit, they made him one smokin' gent: 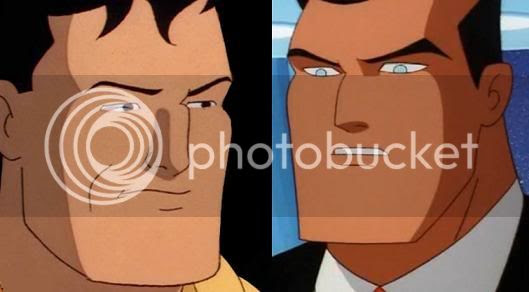 Catwoman is still complete crap tho. What the shit, DC? She was damn hot and they turned her into a pointy black stick.

Anyway, Catwoman's not even in this ep so moving on. I watched the official DVD release, plesantly surprised to find English, French, and Spanish as audio options and subs. I mean, don't be so lazy, DC. This should be standard on all of your releases. What's with all the English only crap?

We open in Gotham, looking so much like the place people from Metropolis go to slit their wrists and end it all. I know it's dreary but didn't recall it being so bleak as this. It's definetely more grandiose. We see two old guys in the helicopter and one of them says he saw a giant bat or some shit. 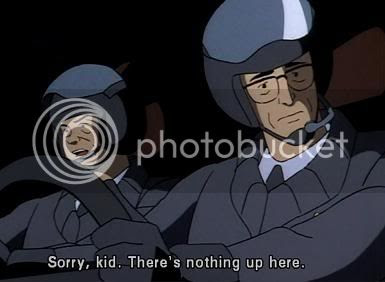 Kid? You guys look the same age! Whatev. Meanwhile, some dude gets attacked by a bat-thing and tossed out a window. Harvey Bullock blames Batman because who else could it be? The Commish, the mayor, and Harvey Dent are also present and I realize for the first time that two of these dudes are both named Harvey. Who cares, where's Batman? When we finally get to Batman, I have to say that Alfred was full of sly little barbs here. I love Alfred. No wonder Batman wants to toss him. 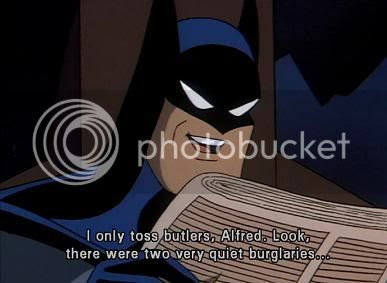 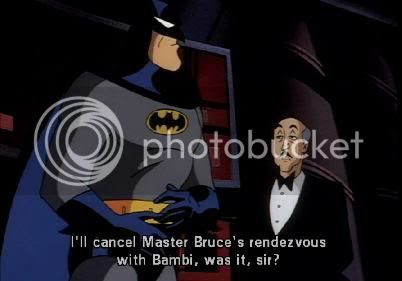 Batman arrives on the scene and--what's she reading? 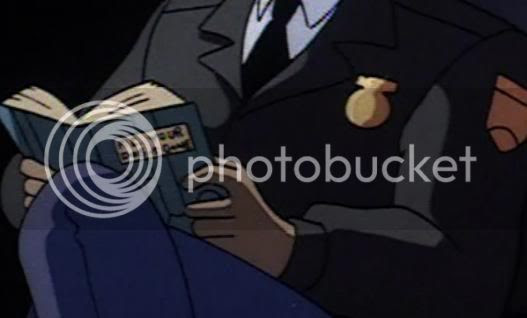 "P.S. Your Dog is Gone"? Or is that "Done"? I love DVDs. Anyway, Batman knocks her out with gas which turns out for the best since that book was probably written by Nicholas Sparks. He goes in and sprays the room with red spray like in CSI and puts on his Cyclops eye-gear since that's more innocuous than that big ultra-violet sperm light. 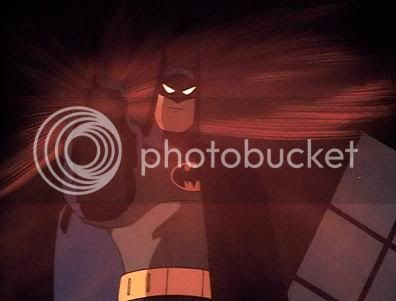 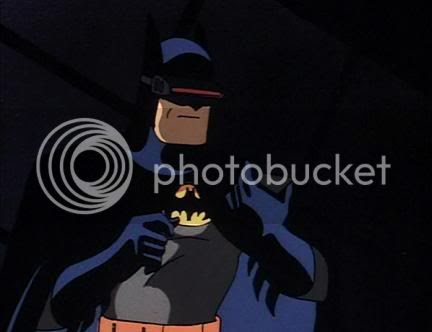 He finds a tape recorder with raptor noises from Jurassic Park, proving that Gotham PD is utter shite considering it was right there under the desk. I mean, all a fat-assed cop had to do was bend over and look. Batman also finds a mysterious hair. Or maybe not so mysterious... 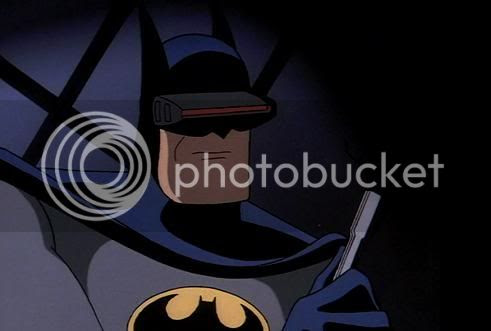 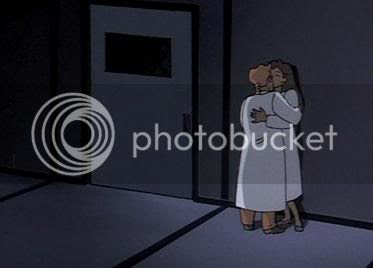 So Batman takes the stuff to the bat-people at the zoo. He can do that shit since he's rich and owns them and all. He meets three doctors: a cranky old man named Dr. March, his beautiful daughter Francine, and his limp-wristed son-in-law. No, really. 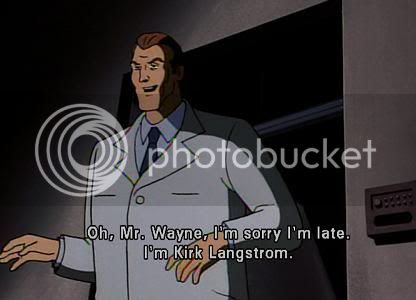 Batman, I mean Bruceman, ask them to do tests and get back to him. I really love how Batman changes his voice as Bruce Wayne. I wish this had been something they kept later in the series. It really set Batman and Bruce Wayne apart. He gets a call from Dr. March about the test results and he switches from gravely, me-so-serious, dark hero to "hyuck, hey there, doc". When WB/DC did the redesigns, they pretty much made Kevin Conroy do the same voice for Batman and Bruce. Don't get me wrong, it still sounds good but I prefered the duality of it all. Oh well.

Being the detect-a-tive that he is, Batman figures out in one second flat that they's a-lying. He all "Computer, analyze this shit". [Okay, so I paraphrase.] And the computer talks back. Yeeeeeeah. Not missing that part. Batman goes back to the bat-place because who doesn't like the zoo at night. He's there to call the old man out on his shit but then son-in-law pretty much confesses even though he really didn't freaking have to. Well, maybe he did because Batman would have to die at this point either way. He transforms and it is really creepy as hell. 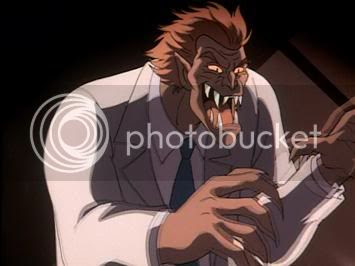 I'm sure this had to give some kid somewhere in 1992 nightmares.

Fighting ensues and luckily for Bats, the cops see him wrestling with the bat monster in the air. I guess this is supposed to establish that he's innocent now but why wouldn't Bullock or some other skeptic not just assume Batman made the bat creature himself and was using it to terrorize Gotham? Batman got exonerated too damn easily. Yeah, yeah, it's a kid's show, but still.

So Batman ends up carting off with the defeated and MAJORLY CONCUSSED bat creature in the dead of night. He takes him back to the Bat Cave to release him back into his natural habitat to find a cure. He punches shit into his computer and whoomp, there it is. Tag Team back again. That's right, he managed to do in less than a minute what three bat scientists could not. Money really can buy him everything.

And after all of that trouble, what does he do? 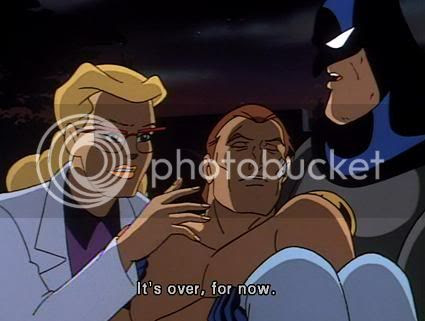 "Here lady, you appear to have lost your husband. I cured him, yo."

Do we ever see Manbat guy again? Don't ask me, I was twelve.

Also, apparently the bat habitat at the Gotham Zoo was designed off of part of Angkor Wat. How effin' cool was that?
Posted by B E C K at 11:47 PM