9 Stupid Comments about Part I of the New Thundercats! 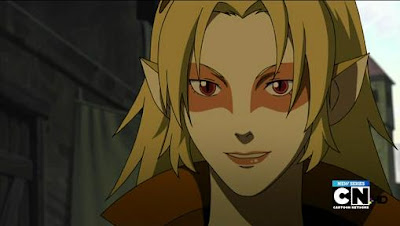 And on July 29th a new generation of furries were born...
The freshly rebooted Thundercats premiered on Cartoon Network this past Friday with a special hour-long event. All in all, it is probably one of the best reboots I've ever seen, the second being the last ill-fated reboot of He-Man. Thundercats definetely stomps that crappy new Voltron toon into the dirt.

The voice acting is good but I wish someone else had been casted as Lion-O because all I hear is Terry McGinnis. The scenary is lovely. Most of the character designs are awesome but Panthro's ugly. He wasn't no supermodel before but, damn, he wasn't freakin' hideous. Lion-O flat-face is kinda creepy. Look at him from the side and he barely has a nose. But this is nitpickery for sure. Now on to the list:

1. I knew this was going to be a good show when Lion-O punched a woman in the face. Okay, so he didn't quite punch her. Whatever, let's watch it on a loop anyway.

2. Snarf tripping one of the baddies like an old lady was classic. Because this is how old ladies with cats and without Life Alerts die. They trip over cats. Then the cats eat the corpse. This is my future. And Snarf looks the type. 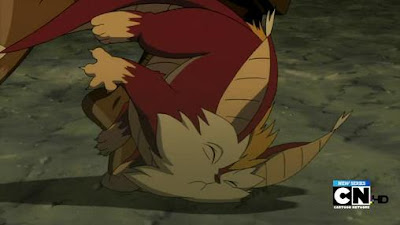 Whatever shuts him up. If you saw old Thundercats, you know what I'm talkin' about.

3. So Lion-O is a precocious, disobediant, red-headed, bubble-brain, stubborn royal with a cute, pet sidekick fascinated with pieces of crap that promise a world beyond the kingdom he knows? Hmmm... 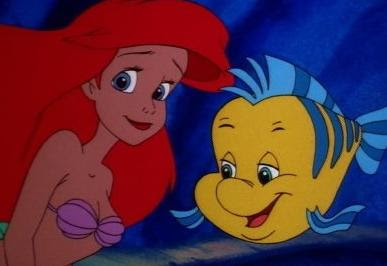 At least someone's not interested in her voice.
And the Little Mer-lion also runs late to important shit.

I bet they all wish they didn't need four for bridge.
If those bombs he bought from that dog-dude had prongs, Lion-O'd probably be combing his hair with it at the dinner table. And he should. His hair's a mess. 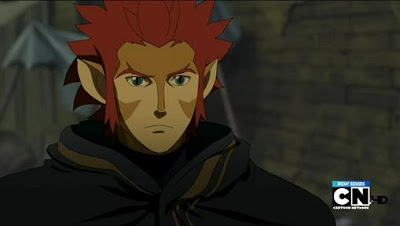 4. At first I thought Tygra knew that was Cheetara he was winking at but in the second part he's all surprised to find out it was her. So he was just flirtin' with some random cleric. That's balls. No, really. That cleric could've been a pretty guy with really smexy eyes. Or had a Mileena-mouth. Or have been an older woman. Do tigers like cougars? 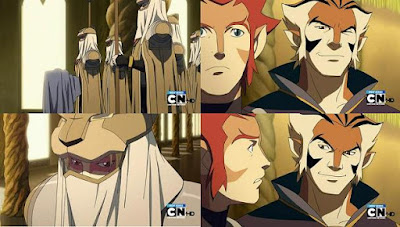 Tygra don't care. Cause that how Tygra rolls. Giggety.

5. When General Grune returned, I realized while he and the king cement their bromance that Claudus has odd yellow things above his eyes and I don't know what the fuck they are. 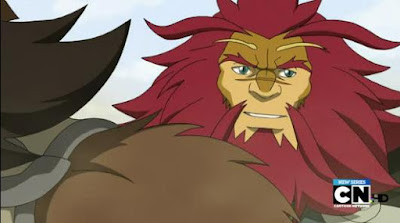 6. Grune has one huge ol' fang. HAH. While I'm sure this implies that he once had two fangs and is a bad-ass who lost one due to the ravages of war, I like to think that dentists in Thundera are just really, really shitty. He also opens beer with it. 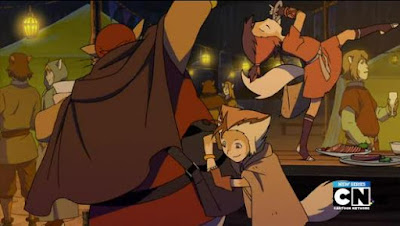 8. Apparently, cats are the man, dawg. As in THE MAN. So to speak. Because they is oppressing other species. 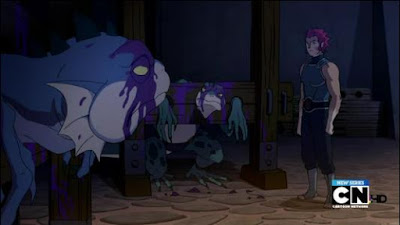 9. The conversation on Lion-O's end of the table must SUCK. 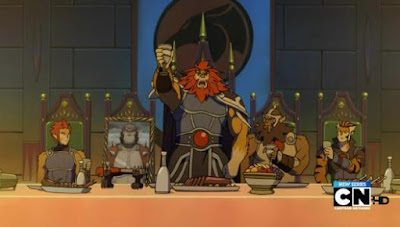