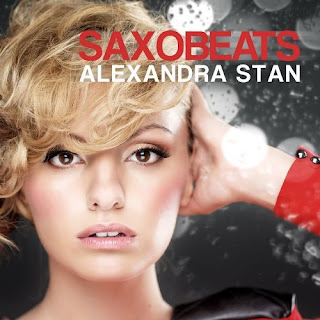 I forget how I first heard of Romanian recording artist Alexandra Stan.  I believe I had bought a couple of songs by Edward Maya or Natalia Kills and she came up in the line of other artists bought by customers.  Either way, I'm glad she did.

Her debut, "Saxobeats" is short (considering the number of different songs totals eight) but sweet.  This is the full-listing for the digital version:

"Mr. Saxobeat" is infectious and has that obvious Romanian-pop feel to it more than the other songs imo.  "Lollipop (Param Pam Pam)" is the second single for U.S. although it was Ms. Stan's debut single and a hit in Romania.  Someone on YouTube called it the "jacked up euro version" of "Fergalicious" and that's not completely wrong.  Still a fun song and while self-indulgent, much less so than "Fergalicious" was in my opinion.  The stand-out song for me on this release is "Crazy", which I don't see as being a single since there's already going to be four from this album and I'm not certain if this album will have more than four singles.  "Show Me The Way" is also single-worthy and I'd love to hear some serious remixes on it.  The remixes and extended versions that are here are nice to have but my ear must be lazy because I don't hear enough of a difference for it to matter other than with the club version of  "Lollipop (Param Pam Pam)".