In case you haven't heard about this already, straight from the horse's mouth... the horse in this instance being a reliable old nag known as the Associated Press:


Or for the simpler, readable version, here's a quote from Top News Buzz:


San Francisco recently passed a law which states that breaks down the concept of giving away free toys accompanies with unhealthy restaurant meals for children. The San Francisco Board of Supervisors passed the law last Tuesday and had an 8-3 vote. This law would take effect on December 1, 2010.

The crazy thing is that people are actually all, "Boo, our personal freedoms! Y!" HUH? Child obesity in this country is nuts, everybody knows that. Why should a business be allowed to profit from this?


"When George Orwell wrote about government control in his novel 1984, McDonald's hadn't even invented the Happy Meal yet."

In How Banning Happy Meals Could Make Kids Fatter, the guy's reasoning is that kids will get their fattening meal plus toy elsewhere. Um no, it's not just the Happy Meal, it's all kids' meals. Nice try. Unless little Katelyn wants to ride her Schwinn to Oakland.

Look, I am not a parent, I speak out as someone that was often tossed a Happy Meal when I was a child. My parents' idea of fostering healthy living was buying skim milk to go with my giant slice of chocolate cake and half-dozen Oreos. I rather wish that, when I was a child, SOMEBODY had made the available food choices healthier.

As a person who developed weight problems as a child and then had it balloon to 210 lbs. in early adulthood, no, I do not think it's okay to preserve a parent's right to completely ruin their child's health. As a little girl, I was never educated by anyone on what to eat or how much. According to public opinion, this is clearly because I didn't have any "personal responsibility". Sure, I was only nine years old when I started packing on weight, but I should've had personal responsibility and demanded broccoli! Since you can't see me, I'M ROLLING MY EYES.

I mean, shit, did you really expect my parents to do it for me? My dad's idea of a "snack" is pieces of breaded, fried catfish in between two slices of white bread. My mom's idea of desert is half a cake, a pack of M&M's, and an ice cream cone. (But only one because she already had cake.) Hyuck! "But it's the right of people like that to fuck up your health!" You know what? FUCK YOU. 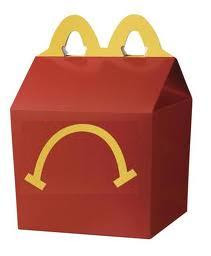 Saying crap like "America, learn responsibility!" makes the assumption that everyone has the tools, knowledge, and ability to make healthy eating choices. Of course, upper middle-class and rich people are especially stupid in this regard since the bulk of them are ridiculously blind of their own socioeconomic advantages. This is a country where you can't even give away rye and pumpernickel to poor people! How much control do you think a kid has in a household with other obese people? Adults who refuse to change? No money, no support of any kind in the home, so what chance do these children have? Can we at least start with the damn kids' meals?

The notion that this is ruling somehow Orwellian in nature is utterly ridiculous. Nobody's made it illegal to buy junior a Big Mac with fries and a large Coke. Nobody's made it illegal for McDonald's the repackage the current Happy Meal as a Mini-Combo and sell the toy seperately. You can buy the toy on its own already. The nature of the Happy Meal is in that it's aimed at children. By packaging the toy, it is specifically branded to children. Why was it okay for them to nix Joe Camel (which I don't agree with at all, but whatever) but Ronald and the ol' Golden Arches can throw a bunch of breaded salt into a fryer and market that shit directly to children? The least that can be done is to make the actual meal healthier. Why should stuff marketed to children be allowed to contribute to serious health issues later on in life?
Posted by B E C K at 5:10 PM

Email ThisBlogThis!Share to TwitterShare to FacebookShare to Pinterest
Labels: Shit I Don't Really Care About