Warning, this is over 8 minutes long and watching the whole thing may be painful. Not in the "poor Steve Harvey" way or "Oh, jeez, grown man blubbering on TV. AWKWARD" way, but in the "why the hell am I watching this? Oh God, is this my life? I should go bang my head in the wall" way:


Firstly, I haven't heard of Steve Harvey since commercials for episodes of the Steve Harvey show back in 2002 or whatever. So I see this video and he's all "boo hoo, mean bloggers". Apparently he was being called out for being a bigot, among other things, and the internet is flooded with smack on the guy. Why?

Well, apparently not believing in God means a person has no moral compass. Note Tyra's uncomfortable rendition of the "polite titter":

He also called atheists "idiots" on Larry King. Ironically, the transcript on that page has Joy Behar telling Steverino: "'Cause it’s a free country, thank goodness." Then Stevie wants to cry later about "mean bloggers"? I didn't see him considering any atheists' feelings. Don't dish it if you can't take it.

He has also profited from the above through a best-selling book, a paper brick with large font and a larger name full of gems like this one:


M]y girls and my concern for the future inspire me [to write this book] as well. They will all grow up and reach for the same dream most women do: The husband. Some kids. A house. A happy life. True love. 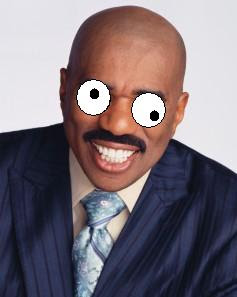 
You know, the Internet has become this place for evil to dwell. Y’unnerstand? They… people who blog… who have no sense of reality… they just blog about you–don’t even know you! I got kids, man, be reading stuff that ain’t true ’bout their father. You understand? I know you know. Because they–they–they–people just blog!