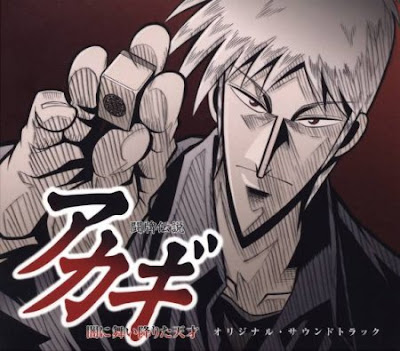 Based on: the manga by Nobuyuki Fukumoto. 1992-present.
Claim to fame: Is this the only thing selling Kindai Mahjong for the past twenty-four years?
Dubbed: Nope.
Subject: Japanese Mahjong.

So... some preliminaries to get outta the way here. This show is technically called アカギ 〜闇に降り立った天才〜 which translates into "Akagi: The Genius Who Descended into Darkness."  Or at least this is what Wikipedia has told me. That's one long-ass name. The guy in the picture is Akagi Shigeru and he's the star of this shindig. Is he a genius? That's probably up for debate. I mean, if he were a genius, I'd think he have better things to do than keep courting that death wish he's had since puberty. Also, being a "genuis" has neither relied on luck and coincidence as much as it does here. However, he's a smart cookie and plays some psychological games, so he gets to keep the genius title. I saw a review or two that didn't like that he's not above cheating but cheating's a pretty genius thing to me. It certainly beats relying on luck. As for the whole "descending into darkness" thing, I mean, meh. He's already a dark kid before any sort of descent occurs. He "descends into darkness" the way my teeth descend into those pumpkin pie bagels at Panera Bread. Goddamn, those are delicious.

Now you're thinking "this show's about a genius? And he descends into darkness? That sounds pretty hardcore for a show about a game best associated with little old Asian ladies like in the Joy Luck Club." Okay, yeah, I hear ya. This is the other thing that I need to get out of the way. This is Japanese Mahjong as played by a young sociopath against yakuza and, later, a fuckin' murderer. This makes it intense high-stakes gambling, which brings the tension and makes this shit fun.

Now I tried this show and the anime based off of one of Fukumoto's other works, Kaiji, at around the same time. It's very difficult to find a bad review of Kaiji. At least it was for me. I wanted something a bit brainy to watch. Not really "brainy" as in book-smart but "brainy" as in "plays mind games." In my opinion, Kaiji didn't deliver on that. I was sick of seeing the main character cry like a bitch and he was kind of an idiot that lucked into "not dying." I was going to say "lucked into life" but nothing about that guy's life other than not dying could be considered lucky. At one point, his survival is enabled by the fact a naked guy taped valuable jewels to his shoulder instead of sticking them in a condom and shoving them up his @ss like a smart person in that scenario would've done. I dumped that show and moved on to Akagi trepidatiously. I was not hopeful it would be that different and very happy to be proven wrong. Akagi pretty much gives me everything Kaiji could not. 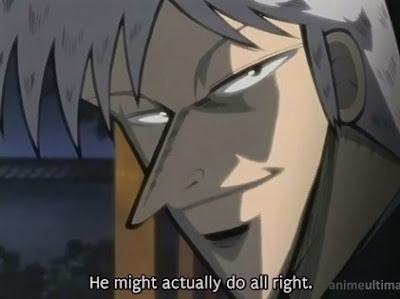 We never learn much about the character of Akagi, but at least Akagi never relies on some naked asshole to save him. Maybe Fukumoto had Kaiji cry so much because Akagi doesn't. If it weren't for his enjoyment in seeing others squirm and wallow in defeat, sometimes I'd swear the guy has no feelings at all. We first meet Akagi when Akagi's thirteen years old but he doesn't look it. Or, rather, he doesn't look different from when we see him again at 19/20. He never undergoes any dramatic shift in personality or any great catharsis either. We never learn what makes him tick.

He's fucking crazy. Even as a child, he's just fucking nuts. In the first episode, we find out he drove off of a cliff. That's frickin' cray and this show never tells you why he's wired this way, so don't go looking for it. Frankly I prefer it this way. I don't need his edgy fuckin' origin. I can imagine an American remake of this shit starring Benedict Cucumber-batch (gotta whitewash that cast, y'all, 'cause Hollyweird says so) where two thirds of the movie is Akagi's tragic, abuse-laden origin and subsequent life as a street urchin and "omg, it's so sad." In other words, shit nobody gives a fuck about. Don't get me wrong, the viewer cheers on Akagi but Akagi doesn't feel sorry for himself and neither should you. At the end of the day, we just wanna see him cream his competition. Not knowing shit about him is part of his appeal.

Anywho, after playing lemming, thirteen-year old Akagi stumbles into a mahjong parlor where some poor, indebted sap named Nangou is about to cark it. The dude's losing bad. If he doesn't win, the yakuza are gonna kill him and collect his insurance payout. Nangou is desperate for a miracle and Akagi Stu becomes that miracle. Wait? "Stu?" Yes, because he's never played mahjong in his life yet he becomes a fuckin' master in, like, two seconds. 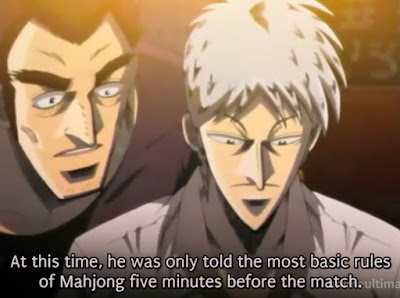 My bad: five minutes. Not to mention I just told you Akagi drove off a cliff and later just walks into the fuckin' mahjong parlor. The narration likes to hype him up a lot, too. We're pretty much told Akagi's legendary over and over again. I mean, sheesh.  At least, in terms of my stu-meter, Akagi's pretty low on it. While he does have some huge luck that comes into play, he's not above cheating or tricks to win when that luck's not on his side.  And it's not as if all the women want him and all the men want to be him. Well, one guy wants to be him but not in the way you're thinking. I don't even recall a single female character in this show. It's a sausage fest if I ever saw one.

The artwork is a mixed bag. Most characters look decent from the front but the profile shots will kill you. It really threw me off when I watched Kaiji so at least by Akagi I was used to it.  This guy below's not even one of the weirdest ones in the show.


Now, I don't know anything about mahjong, but I've never been so invested in guys going "Pon!" "Chi!" "Ron!"  I looked up rules and can't begin to tell you what the fuck some of it means. This show explains very little and you rely on the character's narrations, reactions, and expressions to tell you everything else need. And there's a lot of reactions. A lot of shock and maniacal laughter.  Even with fansubber notes tho, it almost doesn't feel like enough sometimes.

I mean, I don't know half of what they're saying.  I had to go look up Japanese mahjong rules to help me out on some of this. I enjoyed Akagi enough that I didn't mind doing this and rewatching stuff, but I see the complication of mahjong as probably the biggest hurdle folks will have with this show.  "Why wud i watch muh-jzong wid ROOLS when i can see dragon ball super instead?"

Music and voice acting is pretty good. Nothing stood out as bad in that regard. There's an interesting set of characters but no one sticks around consistently. Akagi doesn't have a mentor, sidekick, or anyone in that role. He interacts with Nangou, a crooked cop, and later on a naive co-worker from a toy factory.  All of them participate in their own way in the story but we can't exactly pile them together and call them Team Akagi or something. Meanwhile, any opponents of Akagi's just take the train to Fucked Off Land. We never see them again with the exception of one who finds his ass on a slab in the morgue. It would've been nice to see some of them come back for a rematch or become friends or allies with Akagi. But alas, Akagi is a dark genius and dark geniuses don't have friends. Lose a mahjong match to Akagi and you might just go crazy.

For just being mahjong, the matches are actually kinda thrilling.  If anything, there's too few matches despite this being a 26 episode series. While the first batch of episodes keeps a decent pace, the latter half of it is focused on a single match with no end. Why doesn't it end? Because it's still going on in the manga today. Seriously. Not only has Akagi not won yet, we already know he doesn't lose because this entire series is a sorta-prequel to another of Fukumoto's works—Ten—which has an older Akagi as a character.

So, uh, why was I recommending this again?  Oh, yeah, cause I liked it.  But, really, was it necessary to name one character Ichikawa and another Ishikawa?  I almost got as lost with that shit as I did the mahjong.
Posted by B E C K at 2:09 AM