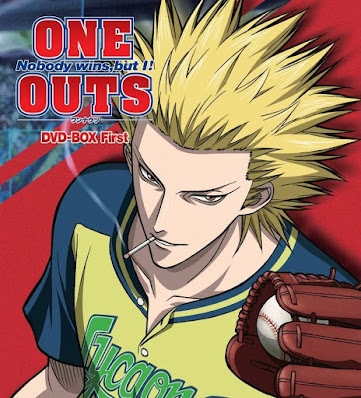 Based on: the manga by Shinobu Kaitani. 1998-2006.
Claim to fame: Insanely homoerotic opening credits.
Dubbed: Sadly, no.
Subject: Baseball.

Not since the high school football anime Eyeshield 21 have I ever felt so cheated about not getting a proper adaptation of a series. I'm still undecided on which was worse: that Eyeshield 21 had 145 episodes of censorship + watering down Yusuke Murata's artwork + long, drawn-out filler-rama that progressively meanders to Nowhere'sville; or that in 145 episodes the Devilbats never fulfilled their goal of getting to the Christmas Bowl even though they get there, totally win, and their journey there is fuckin' sweet. (Come on, that's not even a spoiler at this point.)

"Wait, what are you doing, Beck?" you ask as you look back at the title of this post. "What about One Outs?" Similar to Eyeshield 21, the characters of One Outs also play a sport hugely popular in America (American football vs. baseball); have a seemingly impossible end goal championship game (Christmas Bowl vs. pennant); and are also comprised of a group of generally low-ranked underdogs (Deimon Devilbats vs. Saitama Lycoans). They have one super-talented semi-stoic dude (kicker Musashi vs. ace batter Kojima), a kind-hearted naive catcher guy voiced by Kappei Yamaguchi (Monta vs. Ideguchi), and a wicked fan-favorite motherfucker with crazy bleached hair whose underhanded schemes improve the performance of the players as well as keep the team whole and running (quarterback Hiruma vs. pitcher Tokuchi). And like Eyeshield 21, the manga version reaches the end game while the anime ends prematurely.

"So, why would I want to watch this?" you say. "Also, why do you keep writing dialogue for me?" Well, One Outs--even partially adapted--is still bad-ass. The fact that this is only a partial adaptation means you have no excuse to not watch it. It's like watching The Matrix and saying "well, he didn't liberate all mankind yet so fuck this movie." And like The Matrix taught us, sometimes it's better not to continue shit. Anyway, it's not as if I'm recommending Eyeshield 21. There's only 25 episodes of One Outs. And another benefit of only being 25 episodes means every episode progresses the story. Like one of my other recommendations--Initial D: First Stage--One Outs still feels like a full story with a beginning, middle, and end. Only someone who knows zilch about baseball would expect them to win the championship at the conclusion of 25 episodes. Now that I'm three paragraphs in, maybe I should write about the show itself, eh?

I know I keep making Eyeshield comparisons, so let's get to where they differ. Firstly, what this and actually every show on my "5 Anime" list have in common is that none of them are centered on high school kiddy bullshit. Initial D had high school kids in high school, but it centered more on the racing and had several adult characters. We never had to sit in class with the main character or go to a school festival or something shitty like that. Akagi starred a young boy but every other character is an adult, including Akagi himself once the timeskip kicks in. The Saitama Lycoans are a pro baseball team. Ace hitter Kojima has been on the team for 21 years. Even if every show on my list primarily focuses on younger men (several racers in Initial D are in their early twenties, Akagi is 19 after the timeskip, One Outs' Tokuchi Toua is 20, and characters in the last two shows on my list are also early twenties), that's a small price to pay to not be in a damn high school. 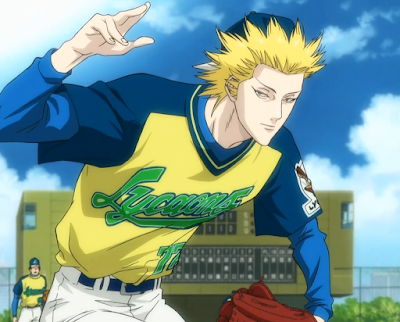 Secondly, there is no stammering doormat protag in the form of a Sena counterpart. The star of the show is undoubtedly this guy: Tokuchi Toua. Tokuchi's not a baseball player. He knows the game and he can throw deceptive pitches, but he is a gambler at heart and uses his pitching talents to earn illegal wads of cash. The funny thing is that his pitching isn't even that spectacular. His batting is passable but not great. He's not a super-fast runner. His stamina for an actual game is shit. But Tokuchi uses his sharp wits and smart mouth to make things go his way and I love him for it.

Let's get to the meat: One Outs starts out with two guys from the Saitama Lycoans pro baseball team looking for a replacement pitcher after one of them hurts his widdle finger while training in Okinawa. They meet a woman called Big Mama (nice name) who takes them to a bunch of--mostly American--dudes gambling in the dark of night at a baseball field. They then proceed to gamble. This is not a great start.

There's nothing more grating than a show that begins with what are basically throwaway characters and makes us spend too much goddamn time with them. Now, these guys aren't true throwaways in the sense we never see them again. I'll call them Nakane and Glasses, because I'm pretty sure one of them was named Nakane and I'll be damned if I remember the name of the one with glasses. Neither one is all that important. In retrospect, we should've had Kojima and catcher Ideguchi as the ones who look for a new pitcher because Kojima and Ideguchi are the two members of the team that kinda become Tokuchi's boys. They keep secrets with him and strategize privately with him and it just seemed like having them meet Tokuchi first makes the most sense. If I recall correctly, the anime even improved on the manga because I don't think Nagane and Glasses were even on the main team and the anime made their roles stronger. To make another Matrix comparison, it'd be like opening the movie with Apoc and Switch instead of Trinity and Cypher. The latter two were waaay more important to the story so using them made the most impact and the most sense. But I digress.

This is the part of the show where it'll probably lose you if you didn't already leave while Tokuchi was flying around shirtless in the OP. Nagane, Glasses, and Big Mama have all sorts of conversations which just sounds like a bunch of prattle. "This is why you Japaneseses lose at teh gamblings. Blah blah blah." This show can get so damn verbose and over-explainy that your brain tunes it out automatically. It is heavy in the beginning and just when you think you're out of the woods, someone's explaining something else. Sometimes even with diagrams.