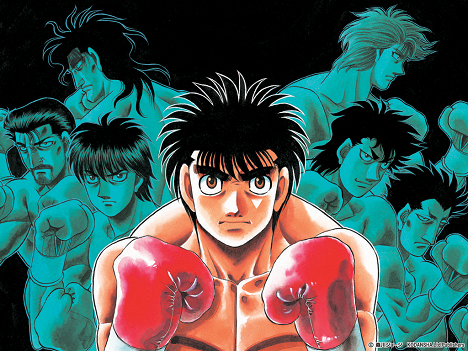 Hajime no Ippo is a modern day classic and if you haven't seen at least one episode of the first series, put everything down right now and go find some of it. Like Initial D, I've heard good things about this show for years and delayed on watching it. At the time, Netflix was always missing the discs of the series or had it on long wait. (Yes, this was back when mailed DVDs were primary for using Netflix.) My Internet connection was lousy at the time too so I couldn't go find it online either.
Like Initial D, I thought "meh, boxing? Who cares?" in the same manner I dismissed a show about illegal street racing. It's old, it looks kinda lame, and doesn't have anything to offer me. Even these days, in trying to introduce this show to others, I see the same dismissiveness with them as I used to have. But passing on this show is a big mistake.
Hajime no Ippo is about Ippo Makunouchi, a limp noodle of a highschool kid that has a bit of a nervous personality and a good heart. He's a hard worker, helping his mother before and after school to keep their business afloat and inadvertently honing his physical strength in the process. He gets bullied and in the first episode, boxer Mamoru Takumura comes to his rescue.

Long story short, Ippo's meeting with Takumura ends up jumpstarting a passion for boxing. Ippo gains strength and confidence (well, some confidence) as we watch him persevere towards his new dream of being a professional boxer.
So some various points here...
1. This story is on-going. My recommendation is actually for the first season of this show. It's over 70 episodes long but it tells a single concise story with a beginning, middle, and end. There's other seasons and OVA but as the narrative progresses in subsequent media, we get into longer (sometimes outright sillier) fights and it honestly feels pointless at times. The story is reduced to "x has to fight y" and the sense of direction is kind of lost. I have watched all of the available Ippo anime and will continue watch more, but I don't blame anyone for checking out after season one.
2. This show is now more readily available. Legally. It's been on YouTube for a long time in its entirety but I fully see the YouTube uploads being pulled as it was recently announced Hajime no Ippo will be on Crunchyroll. Um, yay. Don't get me wrong, I like Crunchyroll way more than some of the other available services. I assume the app is supposed to be garbage if you're a free user so you can pay for better service. Which is fair. But I'm biased and Crunchyroll just likes to freeze on me way too much.
If Crunchyroll isn't your thing, Discotek Media picked up Hajime no Ippo for 2021 home media re-release. I wanted to link to their site but I can't find an entry for Ippo there. Their website just advertises to buy from Rightstuf or Amazon anyway so you can find it there with a simple search.
3. You don't need to know shit about boxing. Like Initial D, this show is willing to hold your hand. Ippo doesn't know anything about boxing either so as the other characters hold his hand, this show holds your hand.
4. The English dub is so bad it's good. It's a bit garbage, not gonna lie. The actual voice actors themselves aren't terrible actors or anything but delivery, the lines themselves, and the casting is all a bit off. Be prepared for that if you insist on an English dub. I do find myself amused by the English dub tho' because of those reasons. I've seen the Spanish dub too and that one's pretty solid.
This show, however, is best experienced in Japanese and has some powerhouse Japanese voice actors including Rikiya Koyama as Mamoru Takamura, who manages to be both a guiding force for Ippo as well as, uh, another bully; Wataru Takagi as Masaru Aoki and Keiji Fujiwara as Tatsuya Kimura, gym mates along with Takamura and Ippo; Tomokazu Seki as Ichiro Miyata, former gym mate turned rival except not really; Kenji Utsumi as Genji Kamogawa, owner of the gym and Ippo's boxing coach; and Masaya Onosaka as Takeshi Sendo--a.k.a. Rocky--a hot-head boxer who challenges Ippo to a fight. All of their performances really bring the comedy and drama home. These actors have all collectively done tons of voice over work and if you watch anime you're bound to find several great characters among their resumes.
5. The humor can be low-brow. There are dick jokes and naked dudes in this thing. Neither of these is bad and everything in this show is funny. Even Takamura being a creep is presented in a way that doesn't glorify his behavior but shows he's a d-bag. (He's still my favorite character.) This point is just here for full disclosure.
6. Don't be fooled by #5, because this show does drama pretty well. There's some tense scenes, some sadness and legit depression. It all arrives organically without being hamfisted. The story's twists and turns come naturally. Going into the show, some characters feel unimportant and while there are characters that stay that way, others actually come back or have a moment that makes you appreciate how it was approached.
While I don't want to spoil everything in this post, an example in particular that stood out to me was Ippo's school bully Masahiko Umezawa. This is the bully we see in episode one; the same bully Ippo has to be saved from.
Normally, this type of character would appear and serve his purpose as he does in the first episode. And then maybe he'd appear later so we get some contrast to Ippo-then versus Ippo-now. But, no, this show does one better. Like, this guy gets actual character growth. I had seen some images of him later in the series and didn't even realize he was the same guy. I was really surprised. Without giving away much more, he actually becomes a decent person. Touches like this throughout any series are just very nice. While it doesn't happen with everyone (some of them do stay kinda random), it does happen with more than just Umezawa's character. It's immersive to have a character come back and be a bit more important than the viewer first thought.
Btw, if you like the old school pompadour delinquent look, Takamura pretty much rocks it the entire show. Putting it out there because I just dig that type of design.
Since you have no excuses, go watch this show. The first part of Discotek's series re-release is currently available, you can go to YouTube now, or wait for it on Crunchyroll soon.
Posted by B E C K at 12:00 AM