Fallacies: "The Life-Changing Magic of Tidying Up." 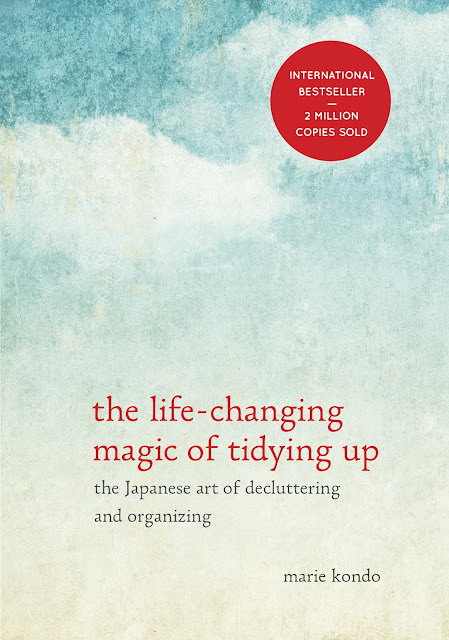 I've been meaning to write something about Marie Kondo's book ever since I first read it the summer of 2015. In going through this moldy old blog, I found a post saved in my drafts that I had been meaning to finish since November of 2016. As Marie Kondo has been a thing ever since, the intent of this post back in 2016 is still relevant now. There's a sequel book and a manga. There's a Netflix show. There's deals with the Container Store and her questionably shilling over-priced goods. So let's talk about her a bit.
The gist is that it's a how-to book on decluttering that keeps your life as well as your home neat and tidy. That's it. This gets conflated with minimalism a lot but it is not a minimalism book. Marie Kondo does not advocate minimalism, she advocates only spending your time, energy, and providing space to the things that actually make you happy and ditching the shit that doesn't.
I won't go so much into the hows of it. You gather your stuff by category and sort through it all at once group by group in a specific order. I read this book years ago and loved it. I've re-read it multiple times since and have listened to audio book several times as well. I used to pick it up again whenever I need a little clean-spiration. Years ago, the book itself ended up Kondo'd and that's a-okay.
Something that keeps popping up around this book, however, are click-bait type articles saying how Marie Kondo is full of shit. I'll be going through some of the arguments they bring up one-by-one. Because while Marie Kondo may shilling and hustling, but she is not wrong regarding her tidying method.
#1. "She wants me to deal with an entire category at once? I have to get every book in the house and put it on the floor? It's overwhelming."

I came across another blog that talked about this and it was all "hur hur, if u can't do it, don't!  Know yerself, hyuck. U go girl." What a shitty train of thought. "Don't even try." That's the gist of the advice. Great.

That's it's overwhelming is the whole point. You're supposed to look at the pile of clothes, shoes, books, whatever and go "Holy shit!  How do I have so many? I haven't touched half this shit in years." You need the shock to realize you have too much fucking stuff you don't use. It's generally said we only wear 20% of the clothes we own. That means the other 80% eats into our space, our money, and our time. If you're rich or something and have a mansion to store stuff in and a maid to clean everything, then fine. But the rest of us sure as hell don't.

Make your stack of books/clothes/whatever and go through the entire stack quickly. "Can I part with this? Will I ever read this again?  Have I ever read it?" Ask whatever you need to ask yourself to decide. If there's any doubt, keep it. KEEP IT.
I don't know why but some people think if they have doubts about keeping something they need to stop. As in stop, justify their choices, and question everything. This is your stuff and you only need to justify for yourself. When in doubt, keep. This is to minimize regrets. You can always choose to get rid of it later.
Some of these Kondo naysayers think the whole process is literal magic. That they're supposed to gather the entire pile and—poof!—they'll end up with a room out of a magazine. They don't understand you make the magic yourself.  It's all a matter of...
#2. "Keep things that spark joy? My frying pan doesn't spark joy. Should I throw away my frying pan, smart guy?"

Some readers have gone through Kondo's books and really latched onto every dumb line they could. Like when Marie Kondo got rid of her screwdriver only to need one later and used her ruler instead. Or how Kondo prefers to put shampoos and soaps away inside of leaving them in the shower despite the fact that Japanese-style showers are different than Western-style showers and her bottles would slime. Or how she empties her purse at the end of the day.
I can't empty my purse every day. I'm too forgetful. (But I can certainly compromise and clean shit out more frequently.) As for your frying pan, if you get plenty of use out of it, it IS bringing you joy.  I know fried eggs bring ME joy. Items that are useful to you are bringing you joy. It's not in the ra-ra way but in the "happy to have fried eggs" way. Stop expecting to orgasm over your frying pan already. It would never be that kinda joy unless you're a chef.
#3. "Okay, but that folding thing she does looks stupid. She really expects me to fold my clothes so they stand up? That's crazy. Imma busy mom/whatever, waah."

There are dozens of videos about the fuckin' folding technique. Search "Kondo fold" in YouTube and you'll get a plethora of demonstrations. Most of Kondo's media appearances feature the folding technique so it's unsurprising the folding "correctly" has become synonymous with Kondoing itself.


For whatever reason, how well one Kondos (yes, Kondo is a verb now) has been tied to folding things right. That completely misses the takeaway: most clothing storage works with folded clothes standing up in a drawer rather than stacked or crammed hanging in closets. AND IT DOES. Kondo just wants to make sure you can properly see what you own so that you wear it.
She's not wrong. Now, I do not do the fold like she does. I actually do my own modified version of her fold and then line my clothes up in my drawer like a bunch of tacos lying side by side. 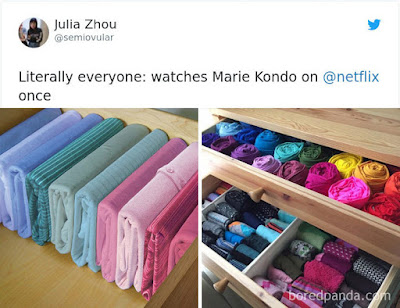 People who complain about the fold are being too meticulous. Honestly, they are probably trying to keep too many clothes. I'm using this pic from a Bored Panda article about Kondo memes (or whatever) just for the visual of the inside of that drawer. I could never live like that either! Whoever's drawer that's supposed to has too many damn clothes. And a lot of people are like this. You just need to Google "Konmari folding in drawer" and you will see loads of people pridefully posting drawers packed with clothes. The folding method itself is not to blame here. The mooks cramming up their dresser drawers are.

Then don't thank the socks. You're being kinda ungrateful tho'. I mean, they covered your stinky feet at least once and you can't utter a thanks before chucking them in the trash bag?  But whatever. The world won't stop spinning because you don't thank the socks. Thanking objects is a cultural thing anyway. She used to be a Shinto priestess. And you're Christian? So what? You ain't going to hell for thanking some socks unless you're, like, shanking someone as you do so. Jeez, thank God if it bothers you that much.

#5. "Wait, I gotta throw things away?  I can't recycle or donate my old items?  What if I try to resell things instead?"

Knock yourself out. Nothing says you can't recycle, donate, or resell items. What I suggest you do is look at the cost in doing so, especially when it comes to reselling.
For example: It doesn't make sense to have a garage sale to sell $30 bucks worth of knick-knacks when you need to pay for the permit, set up your sale space, get up in the morning, and work the sale for several hours. It wouldn't be worth it for me. Plus, it's best to get the old stuff out of the house asap. Nothing worse than junk hanging around and cluttering the floor.

This is a big myth and it's easy to get sucked into it because the face of Kondoing in the US (at least) is about people who have lots of stuff and lots of money. They may not admit they have money, but it's obvious. I'm part of a few Kondo groups online and I see before and after pics all the time of big spacious houses, fancy furniture, and sleek appliances. Lots of these folks have closets bigger than the room I live in. They can easily get rid of something and go repurchase it later.

Look, I'm pretty much fucking poor. I get it. It doesn't appear Kondoing is for you when you see people of means making Kondoing videos on YouTube because, like, it's sooo hard having so much stuff and the means to buy it. Right? What a hard-knocks life. But I was surprised at the things I owned. Old keychains. Purses I hadn't used in years. Shirts and pants I wore as a teenager. Old shitty drawings I made. Pens that didn't work. Childhood toys. Yellowed, old, blank paper. Every pay stub from every job I've ever worked. Rich or poor, we all actually have junk we don't use and need.

We are the caretakers of our stuff. Even the useless junk. We have to clean around it. We have to sort it. We have to launder it. We have to give it space in our homes. I have better things to do with my time than be a caretaker to a bunch of old shit I don't even use anymore. I hate dusting. The only thing I hate more than dusting is having to dust items. The fewer things I have to dust around, the better.
The fact is if you haven't needed or used something for years, you aren't likely to need it in the future. We keep a lot of things out of guilt and fear and rarely out of actual need. Google "sunk cost fallacy." The money or time you've spent to acquire your stuff is gone already. And if you can't find something because it's crammed in a pile of junk, what do you do anyway? You buy a new one. This just wastes more time and money. So cut your losses and move on already.

You are surrounding yourself with things that make you happy. Unless you're a hoarder, there's no way every piece of crap you own could make you happy. If you're a collector of dolls, spoons, or whatever, then keep your collection because it makes you happy. No one is arguing with you.
The people who love books are the most vocal because Kondo doesn't think we should hang onto a bunch of books and papers. "Meh blerb blerb, but I luv muh books. I luv tah read." Then keep the damn books if they make you happy. But what about that sweater you haven't worn since 1987? That used paper cup from Burger King? The shoes you don't wear anymore because they pinch your toes? Your backpack from high school? You know damn well all that shit don't bring anyone joy except a hoarder and we all know hoarders are sick people. (I'm saying that in the kindest way possible. Hoarders have problems and need professional help.)
But I think we need to be honest with ourselves here: most Americans do not read books. They just don't. A lot of us have books to make ourselves look smart. You're supposed to own books. Smart people own books. Sophisticated people get large, overpriced books to plop on the coffee table they never use and display the candle they never burn. If we don't want to look stupid, surely, we must own books. "Look at my perrrrrrrsonality showing on these shelves!" I guarantee most people are not bibliophiles who just love books so damn much.
Posted by B E C K at 12:00 AM