Disney's Aladdin: Not as Good as I Remember It. 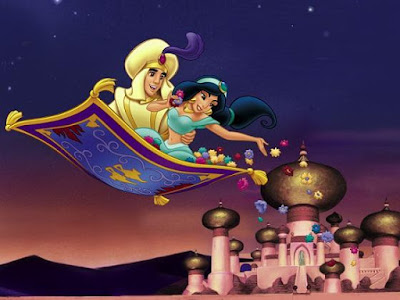 "The starving people of Agrabah can't eat your lousy flowers!"
Firstly, I've LOVED this movie for years. I first saw it when I was twelve, bought the soundtrack on tape, and would sing to all the songs and shit. I wanted to Netflix it recently. It's not available on Netflix as of this blogging and hasn't been for a while. Boo hoo. So I ended up borrowing a VHS, popped it in, and BAM. Upon viewing it for the first time in about ten or so years, there're so many things wrong with it. Now I'm hardly gonna declare this flick a POS. It's not. The voice work is good, the visuals are lovely, the songs are still catchy. Here's a random list of rants that kinda knock this movie down a notch. At least where I'M concerned:

1. Cut off my ear if you don't like my face, but I miss that part. Of all of the concessions for Disney to make to the American-Arab Anti-Discrimination Committee. The edited song is retarded. The heat is immense? It's immense in Arizona, too, but no one wants to sing a frickin song about it. I mean, they put in new lyrics but we still have some fat red-shirt telling Jafar how he had to "slit a few throats". I can live without an ear, but I kinda need my throat. It's very fucking inconsistent. And as far as unfair stereotyping is concerned, wording is a lesser offense when Aladdin, Jasmine, the Genie, and the Sultan are all as Anglicized as possible but Jafar and everyone else are "are dark-skinned, swarthy and villainous-cruel palace guards or greedy merchants with Arabic accents and grotesque facial features." I remember being bothered by that crap when I was a kid. Most offensive of all? Not enough hot Arab men. Come on now!

2. On that note, are there ANY Arab people in this film? That shit's just wrong. Robin Williams doing an Arab accent in absence of real Arabs anywhere in the flick just makes the entire room suddenly uncomfortable.

3. What the heck does this movie have to do with the story of Aladdin? We have a dude named Aladdin, a lamp, and a genie and that's pretty much where the similarities end.

4. Robin Williams is annoying as fuck. Some of you are all "well, no shit", but he honestly never annoyed me before, believe it or not. I found myself wanting to reach into the TV and strangle him. When someone comes off more annoying than Gilbert Gottfried in under a minute, there's a serious problem.

* It's okay to steal what you don't got… as long as you share the loot. Aladdin can steal from hard-working folks because he's so damn hungry. In fact, he happily sings and dances about it. Jasmine can steal an apple to feed a child. They are good-looking and heroes and suffer no consequences other than getting some exercise courtesy of the palace guards. If I don't have any bread, it should be well within my rights to endanger someone else's livelihood to feed myself. This is later glamorized when we find out Aladdin's father is KING of THIEVES.

* To fulfill your dreams, you must be rich. Aladdin is poor and free and longs for money while Jasmine is rich and longs for freedom. Earlier in the film, we were meant to believe that, by both of them feeling trapped, they both just saw the grass as being greener on the other side. Instead of Aladdin embracing his freedom and Jasmine learning the responsibilities of her position and wealth, Aladdin just gets rich by association AND EVERYTHING IS ALL BETTER.

6. The Sultan was so damn attached to adhering to the stupid law and then just changes his mind in the end. The fuck? Why'd they even bother making this a plot device? It's like they didn't make the Sultan bat-shit crazy enough and needed to prove in the end that he'd finally snapped. At least adherence to the law meant that he respected traditions. If he didn't like the law and knew the princess didn't, why didn't he change it a long damn time ago?

Also, it would have been hilarious if Jafar wishing himself a genie hadn't backfired like Aladdin thought it would. If genies can be free, then why did turning Jafar into a genie simply not make him a free genie? Even if someone had to wish genies free, the wish could've still effed up and made him a free genie. The wish itself never specified either way.
Posted by B E C K at 11:14 PM

Email ThisBlogThis!Share to TwitterShare to FacebookShare to Pinterest
Labels: Animation