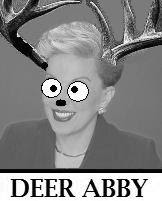 Today’s Victim: Dear Abby [1/06/10] Some of the following shit snipped for useless crap:

DEAR ABBY: I would like to share some important information with "Don't Want to Lose Him in the U.S.A." (Nov. 10). She's the young lady who is being pressured by her boyfriend to take photos of her classmates in the girls' locker room. The students at the high school where I teach recently attended a program on Internet and online safety. One of the things that really surprised them was learning cell phone calls don't just go from one phone to another. .... All sent messages and photos are stored on the provider's server. This means pictures deleted from the phone are never really deleted -- and text messages and photos never go away. .... "Don't Want to Lose Him" needs to clearly understand she might be prosecuted for producing, distributing and possessing child pornography. -- A HIGH SCHOOL TEACHER IN CHURCHVILLE, VA.

Because if it's not a deterrent that she'd be the sidekick of a gross, perverted creep, the law surely will be. HO HO. Young people these days DON'T EFFIN' CARE, dumbass. I mean, she named her letter "Don't Want to Lose Him". You know where her priorities lie.

DEAR ABBY: Refusing to take the photos, but keeping it quiet, is not enough. I think "Don't Want to Lose Him" should make copies of your column and paste them on every locker to warn all the girls they are at risk -- even when they think they have privacy. She should also tell the principal, who may be able to provide extra protection. -- SHEILA IN GIG HARBOR, WASH.

If there's anything youngins like to do these days, it's TO READ AND FOLLOW DEAR ABBY. LOL RLY? A copy of an advice column on some kid's locker has about as much impact as a copy of The Watchtower wedged in my porch door. And what makes you think the principal gives a shit? Or that he'd even listen. Nice try. What are you? Eighty? For the record, there's never real privacy in the flippin' locker room.

DEAR ABBY: I think the issue of that young woman's low self-esteem should be addressed. Her boyfriend is holding her hostage to his wishes and desires, and will probably always do so if she continues to stay with him. It's important that "Don't Want to Lose Him" learns to love the principled, intelligent person she already is and continue to stand up for herself. Eventually, someone will appreciate her good qualities and she won't have to settle for less than she deserves. -- BEEN THERE IN ARIZONA

How is she "intelligent" considering the loser she ended up with? Especially since she doesn't want to looo~ooose him? GAG!

DEAR ABBY: "Don't Want to Lose Him" should report this to a trusted adult or school counselor. At the very least, this girl needs to know she will be doing a great service if she lets the other girls know so they can be on the lookout for someone sneaking a camera or cell phone into their locker room. She could also use some support and affection that doesn't come from a manipulative, self-serving "boyfriend." -- LISA IN SAN RAFAEL, CALIF.

School counselors are a fucking joke. You can see how they've helped me. And if she tells the other girls, I guarantee they're all gonna be on the look out for HER sneaking in a camera.

DEAR ABBY: I am a mental health professional. What "Don't Want to Lose Him" is being pressed to do is called "sexting," and it is a criminal offense in almost every state in the U.S. The young lady and whoever receives and distributes those photos could be convicted of a felony, serve prison time and live the rest of [BLAH BLAH BLAH BLAH BLAH WALL OF TEXT.] -- JACQUELINE IN GIBSONIA, PA.

Congratulations on having a degree in IT'S FUCKING OBVIOUS. I hope you at least don't owe much in student loans. Really though, I love how old people define shit for the rest of us as if they discovered it first. Except I'm fairly certain sexting would be the "Lose Him" girl sending pics of herself to her creepo boyfriend.

Who the fuck cares what the definition is or the law is in this instance? This poor girl is lonely and has never been loved before. And here's this tool playing with her heart and trying to recruit her to be his skeezy voyeur cam or ELSE. Why is no one telling this chick to love and respect herself? Why has no one asked how "Lose Him" would feel if she found out one of the other girls snapped a pic of her ass and spread it all over school? Or why didn't anyone ask her if she really doesn't like having teeth that much because some of those high school chicks would totally knock them out if they found out those kinds of pics had been taken of them?

DEAR ABBY: I became a grandmother a year ago. My son told me I have to join a social networking site if I want information about, or to see pictures of, my grandson. He claims I can find out all I need to know on his profile page. Abby, I'm not asking for pictures to be sent in the mail, nor am I requesting constant calls about what is taking place. I'm not completely computer illiterate, but I do have an aversion to being grouped with everyone else. I am his mother, but I don't feel as though he thinks of me as someone special. Am I totally out of touch with today's technology? -- OLD-FASHIONED GRANDMA IN MONTANA

If it's any solace, your letter made me seriously fucking mad. If I knew your son, I'd give a kick in the balls for you. Your son is what is known as a technology whore. He is part of the mostly middle-class segment of selfish, spoiled America with too much goddamn time on their hands. These people are so in love with iPhones and Facebook that anyone who doesn't conform to it is inconvenient. "How dare you not answer my text to my convenience! How dare you actually make me visit you and talk to you to communicate!" They take pictures of every other meal they eat and post song lyrics as a status at least five times a week. No, you are not old fashion for not wanting to join his [likely] crappy network of fellow peons.

If I were you, I would call him anyway to initiate conversation. Given the a-hole your son is, he'll probably talk to you while driving using his Bluetooth, but hey, make that technology work for YOU and not him. I would also let him know you can't join his profile thingy because "computers are just too dern hard" and you're too confused by that "FaceSpace doohickey". As an older person, make your age work for you! You can get away with it! What is he gonna do: get angry? Only a total dickwad would yell at a granny for not using a computer "correctly". If you're long distance, try reaching out to his wife or any other relative nearby and see if they can score you pics of your grandson that Mr. Pisspants can't be magnanimous enough to send to you.
Posted by B E C K at 12:03 AM