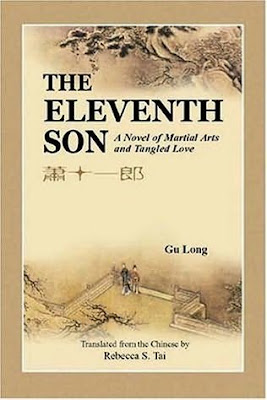 On one of his missions, Xiao (the Eleventh Son, known as the Great Bandit) meets Shen, the fairest woman in the martial world. By the will of fate, he rescues Shen several times, which plants the seed of love in both of them. However, Shen is married to a rich young man who is also an outstanding martial artist. As if things were not complicated enough, Xiao has his own secret admirer, Feng, an attractive swordswoman with a quick temper.

Xiao is drawn into a messy fight for a legendary saber, the Deer Carver, and is accused of stealing it. Xiao finds out that the person who has set him up is a mysterious young man with an angel’s face and a devil’s heart. Before he can pursue any further, Shen’s grandmother is murdered, and Xiao is named the killer. It appears that things are spinning out of control…

"The Eleventh Son" is a wuxia novel written by prolific Chinese novelist Gu Long, who wrote over sixty novels before dying at age 48 in 1985 from too much drinky-drinky. To my knowledge, "The Eleventh Son" is the only one officially translated into English. For those of you unfamiliar with the wuxia genre, wuxia stories are based in the times of long ago, chronicling the adventures of Chinese martial artists bound by honor and full of secret fighting styles and techniques. My usual example when explaining wuxia is to say wuxia stories are the book version of the movie "Crouching Tiger, Hidden Dragon", which in turn based on the fourth book of the Crane-Iron wuxia series by Wang Dulu. [And surprise-surprise, it's not published in English either.]

"The Eleventh Son" has a great start, the story opening with the reader meeting Feng. Feng Seniang is beautiful, over-30, bitchy and awesome. As much as I wish the entire story were about her, she only features in the beginning and the end of the story. Boo hoo. Feng's BFF is Xiao Shiyi Lang, the titular eleventh son whose eleventhness doesn't figure squat except for the sad fact that the other ten are dead and he's oh-so-ronery. Xiao is a sinfully-clever, notorious bandit who has the misfortune of being the scapegoat of the so-called ideal gentlemen. It's not the name of their gang or anything, it's basically a group of characters in the story thought to be honorable and chivalrous. Except they're all nasty rats.

Xiao and Feng begin a mini-quest of sorts for a powerful blade called the Deer Carver, which is being escorted to Shen Manor with the aim of getting an owner. Xiao is blamed for the theft of the Deer Carver and even though he and Feng managed to steal it before the final destination, the one they swiped was an obvious cheap copy. A plot is afoot. It is later that Xiao ends up finding the person who has the real Deer Carver, a fiendish character named Little Mister. Little Mister passes for a scampish, adolescent boy but is actually a beautiful woman and never bothers to change a disguise or anything. She just manages to pass for both and dudes lust for her and shit. Yeah, I'm not touching that one.

Xiao also manages to meet Shen Bijun, a woman otherwise known the prettiest lil' piece in the martial arts world. Shen is married to Lian Chengbi, a man who is handsome, refined, reknowned, wealthy, and about as much fun as a box of paperclips. Xiao is constantly rescuing Shen and the two of them eventually form a couple destined to an ill-fated love. You will literally shake your fist as poor Shen is put through hell, with people she thought she could trust betraying her left and right. She in turn betrays Xiao more than once and you really feel for the poor guy. Although Shen's grandmother does indeed die and Xiao is blamed for it, it's really the least of their problems.

Despite the depth their feelings grow to, these two break each other's hearts again and again. The love story here is poignant and pretty much rivals any Harlequin I've ever reviewed here, making it ironic that this is also my first non-Harlequin review. The story is strong and sorrowful. That's no spoiler, you know how this will likely end. Though there is some unintentional lulz at Shen telling Lian she will not be unfaithful over and over again. Come on, lady, you're in love with another man. It really doesn't get worse than that.

At under four hundred pages, "The Eleventh Son" is a brisk read and a great introduction to wuxia for the uninitiated. It is translated by Rebecca S. Tai and is published by Homa & Sekey Books. I give it my highest recommendation.