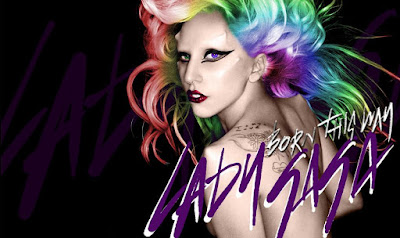 In many ways Lady GaGa reminds me of M. Night Shyamalamadingdong. When "The Sixth Sense" came out, people--yours truly included--applauded his originality and couldn't wait for the next pile of shit he'd fart out. We were riveted by what twist we'd see next. And as some of us gobbled up "Unbreakable", then "Signs", then "The Village", we began to drop off like flies. Would his biggest twist have been no twist at all? I think so. Lady Gaga could only benefit by taking some notes.

In many ways M. Night Shyamalan reminds me of Lady GaGa. When "The Fame" came out, people--yours truly included--applauded her originality and couldn't wait for the next oozy dance-track she'd poop out of her plastic-lined, rainbow-colored keister. We were riveted by what kind of fucked-up outfit we'd see next. And some of us gobbled up "The Fame Monster", then "Born This Way". That's right. "Born This Way" is Lady GaGa's "Signs". I have not tested if it can also be killed with water.

Some of our old love for Lady GaGa is still in this album. Each beat is poppy and slick, none of the tracks inspiring me to press the skip button. Unfortunately, they don't really inspire much of anything. Don't get me wrong, I found some of "The Fame" to be lacking as well. But that album bore out some damn infectious hits and I don't see any of that here. "Born This Way", the title track, is pretty much a rip-off homage of Madonna's "Express Yourself". I think most people know that and it's actually okay because GaGa does her own thang. It's catchy and listenable, heads and tails above the rest. I really like "Government Hooker", "Heavy Metal Lover", and "Electric Chapel", too, but not quite as much. "Just Dance" from "The Fame" still kicks all of their asses before school and takes their lunch money.

I'd like GaGa to be less daring when comes to costuming and put just as much adventure into her actual music. This album seems determined to showcase Lady GaGa's vocal limitations. She repeats the same words so often you'd think someone taught a parrot to imitate Lady GaGa and it put out this album. Come on, GaGa, you already did this repetitious thing with your last two albums. (Or one and a half if you prefer.) Someone give this woman a meat thesaurus. 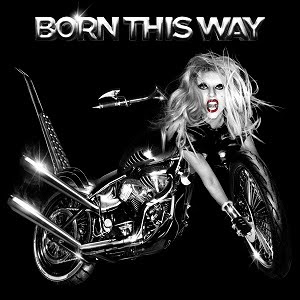 There doesn't feel like there's any variety in the sound of this music either. Many of these songs sound like the same damn song with minor differences. She is electro-pop's answer to Nickelback. I wish she had just dialed it back for some of this stuff. You don't have to sing that loud or use a synthesizer all the time. "The Queen" and "Marry The Night" sound like they're going to be something different and then someone decided they needed to be noisy and obnoxious instead.

Thematically, "Born This Way" the album feels superficial. There's religion, fashion, and people being who they are and special and loving themselves or some shit like that. Big whoop. We GET it already: you were BORN THAT WAY. I picture the brainstorm session for this: people, Red One, and GaGa around table that looks like a giant egg covered with purple spots and wondering what words sound cool when repeated by chic gays in teh club.

Finally, that cover's ugly. Why didn't she ask her monsters for help? I've seen fanpages made by fourteen-year-olds edgier-looking than that... back in, like, 1999.

P.S. Stay out of Seinfeld's box.