Book Review: The Heir From Nowhere

Heh, heh, come on, you and I know he came from somewhere. *snort* Straight from the back: 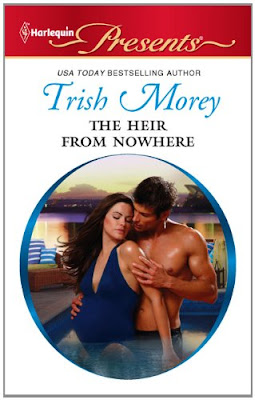 Don't you fellas hate it when that happens?

Dominic Pirelli's carefully ordered world falls apart when a female stranger phones with staggering news: an IVF clinic mix-up means she is carrying the baby that he and his late wife dreamed of having! Though he distrusts her motives, Dominic is determined to keep waiflike Angelina Cameron close. Taking her to his luxury home, the hardened tycoon reluctantly begins to admire Angie's strength and gentle beauty as her body swells with the precious life inside her. But when their baby is born, who will have custody of the Pirelli heir?

Both of them, of course. The book can't end any other way!

Firstly, I must applaud this book for being one of several new books by Harlequin where someone with a brain finally decided to have names that don't have "billionaire", "mistress", and "secret baby" in the title. Also, that cover actually looks like how I pictured these people, depicting them in the pool. Yay for having an event that actually happens in the book.

Author Trish Morey has written a romance novel that won't have you plucking out your eyes or, to use a more realistic reaction, throwing the book across the wall in fury. She presents two flawed people who manage to both be kinda likable.

Heroine Angie Cameron is down on her luck. Her rat of a husband is leaving her and taking all of her good shit and half of her home. Angie and her husband used an IVF clinic but her hubby called it the last straw on their strained marriage when the clinic gave Angie the wrong embryo and she decided to have the baby anyway. As we learn later, Angie was once an abortion possibility herself and she doesn't want to deny the baby a right to live. Fair enough. No, but really, whether you're pro-choice or pro-life, you will agree this boner is a total jerkwad. So she contacts the would-be daddy so the baby can live with his or her natural family after entering the world.

Dominic Pirelli is handsome and rich like most of these Harlequin alpha-male bastards. However, he started out poor, living a scant neighborhood or so away from despondent Angie's current location. He has a somewhat tragic past and hopes by making a lot of money, he can help the people he loves. Unfortunately, the poor fellow ends up losing everyone along the way. This chap just can't catch a break. And his outlook doesn't improve when the IVF clinic admits their whoopsie. Yowch.

So when Angie contacts Dom, he thinks "oh no, this chick just wants to sell me my baby back." She looks sick and poor and while he can't fault her for the poor part, the sick is something else. Dom's deceased wife—that's right, the baby-mama's dead—had an eating disorder and died from it. And poor Dom's all "sigh, not this shit again."

Through a sequence of events, Dom gets to know her little by little and decides his best course of action is for his baby to grow somewhere safe: his giant-ass beach-side mansion. Hey, sounds good to me. So he moves Angie in and the whole growing-closer-together thing begins.

This book never felt like it had a slow spot and every part serves a purpose whether it be in the over-all plot or establishing the characters in the book. Dom's PA Simone seemed a little useless but that was only because I initially expected her to have a slightly larger role in the book. I actually wouldn't mind if she appeared in an equally superfulous role in several different Trish Morey books. Kinda like that Richard Scarry book "Postman Pig and His Busy Neighbors" where you had to look for that pickle in each picture. Ms. Morey, make Simone your pickle!

All in all, this book didn't really stay with me but it was an enjoyable read. Not too much drama and two leads who seemed to be decent people. Because I would've liked a slightly bigger moment to come along and complete the book—we were a little luke-warm here—I'm taking off a tiny sliver of acorn. Also calling the kid AC-DC wasn't cool. That poor child.