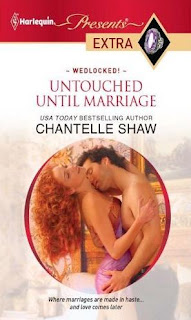 Yes, my latest bad habit: reading Harlequin romance books, better known across the ocean as Mills & Boon. Granted, I won't knock the entire line. Now and again there are a few titles I actually enjoy, but that's a post for another day. Let's be frank. There's a perfectly good reason these books have the reputation they do. You have to sift through a lot of poo to find, uh, a poo-diamond.

"Untouched Until Marriage" is at least the second book I've read by Chantelle Shaw. Far from the worst Harlequin I've ever read, I could see someone else enjoying this... somehow. Maybe. Frankly, it's very straight-forward relying on the old Harlequin/Mills & Boon formula: lily-white, young virgin meets older, cynical, rich foreign man. Read one and you've read most. Judging from this and the other book of her's I've read, it does seem Ms. Shaw attempts to add her own little twists to the formula. The other book, "The Greek Boss's Bride", had the rarity of an infertile heroine and the couple ultimately adopting--which I loved--but really seemed to drag and not be enjoyable to read though. This book, like that one, has a unique premise. Beyond that it falls into the trap of Harlequin plot same-old same-olds, but I guess that was the point.

"Untouched Until Marriage" focuses on 22-year-old, red-headed, hippy-virgin and painter Elizabeth Maynard a.k.a. Libby. Libby's troubles stem from her now-deceased, hippy lap-dancer mother, also Elizabeth Maynard a.k.a. Liz. Liz decided it would be a great idea to use inheritance from grandma to open a health food store in the middle of nowhere. Go Mom. Then she managed to win a cruise vacation which inexplicably seemed to be for one but whatever. There she met mega-rich, much older Italian Pietro Carducci and got knocked up. Ew, Old People sex. Liz hears nothing further from Pierto once the cruise is over and dies later, saddling Libby with her baby half-brother Gino and the damn store which is of course failing. Enter Raul.

Raul is the tall, irate, and olive-skinned 36-year-old adopted son of Pietro who apparently has "hair as sleek and dark as a raven's wing", leading me to conclude he is using a dead bird as a toupee. Nevermore. He immediately wants to rail Libby all of six pages into the book. Paranoid about losing a baby she was never given legal right to (because hippies always ignore the law), Libby--with the same legal name after all--has been passing herself off as Liz so she can keep Gino. Thus, she lets Raul believe she is Liz. Visions of Libby lap-dancing and getting boned by Daddy Deadbucks run rampant in Raul's head and he's so digusted he doesn't nurse his hard-on for Libby again until page fifteen.

Bitchy Raul informs Libby that she's "hit the jackpot": Pietro is dead and provided for Gino and Liz in his will. Pietro, in true #1 Dad fashion, let Raul find out in the WILL about Gino. Pietro's company will be split in half between Raul and Gino, with that latter's shares managed by Liz because goodness knows Pietro deemed by a quick cruise lay that a reckless, dancing hippy was just what his ailing company needed. Go Pietro. Note that although Raul bitterly identifies Libby as his father's "mistress", Pietro's wife has been dead for TEN YEARS. Sheesh, Raul, even boneheaded 65-year-old codgers need a little fun. Chillax, dude.

Raul insists Libby and Gino must go to Italy with him because that's where Italians live. And also, our boy Raul want control of those shares and some of Papa's sloppy seconds. After some boring pages of evoking sympathy from each other, Raul decides he simply must raise Gino as his own son and marry Libby to give Gino a stable childhood. Kinda weird, bro, but whatev. [We also learn Raul has been burned by a prior marriage to his then PA Dana and I half-expected that relationship to be its own Harlequin because, really, you find the PA x Rich Boss plotline in about a third of them anyway.] Meanwhile, Libby's all "Can I marry a man who doesn't love me?" and I'm thinking "It's page 69, girlfriend. If you love him already, why don't you at least tell him you're not Liz and rely on the better nature you know is there within him to share Gino with you?" Because that would be too reasonable, Libby persists with her lie and caves in the next chapter.

This set-up allows Raul to predictably "Harlequin Hero Post-Coital Rage"™ at Libby when he tears through her hymen on their wedding night. Well, actually he pumps "his seed into her in a spectacular release that racked his body with exquisite aftershocks of pleasure". Then he raged. You'd think Raul would be overjoyed to find the woman he wanted never had old man sex with his old man, but he's too busy being preoccupied with the fact that he could've had the shares and the kid without any marriage. He even says crap like "you were presented with the opportunity to marry a billionaire and you seized it." Dude, isn't that what prenups are for? Never mind the marriage was HIS idea. HIS idea to take control of Gino's shares. Maybe those "exquisite aftershocks" rattled his brain loose from the stem. Even more so when you consider that even though this is an interesting dilemma, Raul changes his mind five pages later. Bi-polar much?

We also meet Aunt Carmina who interestingly was in love with Pietro herself. As if suddenly becoming mindful of the Mill & Boon page limit, this story like the above conflict is never expanded upon like it could've been and Carmina doesn't do much of anything in the book besides be a bitch. She brings up to a now complacent Libby that Raul only married Libby to control Gino's shares. Libby freaks, it never occurring to her that this ceases to make any freakin' sense because Liz is dead and Libby never had any legal claim to jack-squat. If Raul stayed married to her, it was obviously because he wanted to remain that way. However, obvious reason is not obvious. Who cares anyway because it OCCURS AND IS RESOLVED IN TEN PAGES. See a pattern here? When we discover Raul gave the shares back to her two weeks into the marriage because he's a lovesick idiot, you will headdesk with me.

If that's not enough, we get an epilogue that basically serves as a tacky bow on the entire thing. Libby is such a gifted artist and a beautiful, eccentric hippy. All the men want her. Raul is possessive cause he LUVS her. Libby and Raul have multiplied and are so damn happy. WHO. FREAKING. CARES.

This thing is just dull. Other authors have made entire books over the situations that get brought up and resolved within the same chapter in this one. Because some of the plot points are resolved so quickly, it just makes the characters seem flighty. "I'll divorce you. Wait, never mind." "You married me for the shares. Oh, you gave 'em back? Cool."

Two acorns out of five.