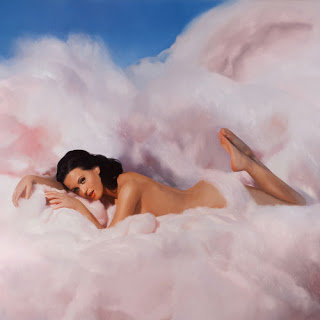 1. Teenage Dream - This song reminds me of the album cover. I could totally picture her nekkid on that cloud singing to some poor dude with a raging hard-on. Then at the end he wakes up, flings the sheet away and furiously jerks off just as his mom suddenly opens the door. "Junior, do have any dirty sooooocks?" Hilarity ensues. I gave up a long time ago holding serious issue with a singer's vocal ability or lack thereof. I find it really depends on the song. In this case, however, the two main verses really feel like they could've been helped by a singer who can, well, sing better in whatever register that's supposed to be in. I love the rest of it though. Maybe it would've been better as a duet with someone else singing those higher verses?

2. Last Friday Night (TGIF) - An Amazon reviewer pointed out: "Some of the stuff she sings in this one song were blacking out, breaking laws, maxing out credit cards, having a threesome, and drinking to[o] many shots. ... Her core audience is teens, and they will start thinking this is normal behavior with the way she is all blasé and carefree about seriously stupid behavior." Now, while those are good points, I personally don't give a rat's ass. People that would go out and do that Darwinizing b.s. don't need a Katy Perry song of all things to encourage them. While it has a decent beat, the dumb lyrics make it a shallow, uninspired thing and the voice never really rescues any of it. In other words, it probably would've been better suited for the next Ke$ha album. (I like a couple of Ke$ha's songs, too, but come on, her voice sounds like it's giving you an STD half the time. You know it's true.)

3. California Gurls - What does this song have in common with Rhianna's hit "Umbrella"? Give up? They're both ruined by frickin' rappers. Why do they do this crap? What about delicious, sugary pop in this instance requires some unwelcomed dose of "bow wow wow yippee-yo yippee-yay, I like dat ass"? When I listen to "Umbrella", I put on a version that removes Jay-Z. Someone remove Snoop. DO IT. Yes, he likes Katy Perry's ass. I get that and I'm okay with it. But, really, if I gave a ding-dong hey-ho about Snoop, I wouldn't be listening to Katy Perry's album instead. It's like someone just spat on my biscuit. Yeah, I could cut the part with the spittle off and eat the rest but I'd rather just throw the whole thing away.

4. Firework - No, I never feel like a plastic bag. That's not eco-friendly for one thing. "Firework" is due to be the third single for the album after "California Gurls" and "Teenage Dream". Considering those became huge hits, I expect this one to become one, too. Not that it really deserves it. Don't get me wrong, it's kinda cute and it has that generic Top-40 radio sound the rest of the world swoons over. Something I'd put on in the background while I do dishes or something. It, like the previous two, again shows Perry's strength in the chorus of her songs. Those always feel so strong to me and I find much disappoint that the verses aren't catchier like in "Hot and Cold" off of her other ablum. All in all though, it's one those songs that's usually found in between two much better ones. And since it's not terrible, you let it play instead of skipping to the next track.

5. Peacock - Has a nice beat but, God, "I want to see your peacock, cock, cock"? "Are you brave enough to let me see your peacock? What are you waiting for, it's time for you shoot it off?" Ugh. Well, at least she hasn't forgotten her target audience. I wish the lyrics weren't so immature and stupid, which is hilarious for me to type because (1) I actually listened to the three previous tracks with a straight face and (2) I normally live for stupid and immature lyrics. Or, at least, I can get over them and enjoy the beat. I can imagine how the song writing session for this went: "Let's see how many times we can get the word 'cock' in a song. Tee hee." Yeah, real fuckin' creative. They should've just gone all the way and made it about John Hancock. Or shuttlecock. Please, someone, cover this song with different lyrics.

6. Circle The Drain - Another catchy tune with a much better message: "Ew, yer a druggie. Can't help ya. Bai bai." I can get behind that. I like the guitary riffs at the beginning. Kinda wish it was a little harder. I think I really would've loved this if it had been done by Orianthi. Alas.

7. The One That Got Away - Something about this one reminds of me of a sweet ice cream truck tune. Not like "Pop Goes the Weasel" and that tired old shit, but a cute, generic "ding ding ding" type ditty. And somehow Katy Perry appeared, climbed on top of the truck, and started singing about love lost. Then she handed me a bomb pop. Pretty freakin' cool.

8. E.T. (Futuristic Lover) & 9. Who Am I Living For? - I love these damn songs. The September 6th issue of People Magazine actually called them "dreary tunes" and "a rude awakening from all the fun." "The fun" for the reviewer being Perry crowing "your peacock, cock, cock/ your peacock, cock, cock." But hey, with a name like "Chuck" he's inevitably a dude and Katy Perry's cute and repeating the word "cock". Meh. Fine. "E.T." is probably my favorite track on here. It's hardly the wrist-cutter fare implied. Consider that, pages earlier in this same magazine, the series "Nikita" starring Maggie Q was given a full four stars even though it was clear from the review that the writer hadn't even seen it yet. Then, the next page over, the complete collection of the wall-banger known as LOST also got four stars. Yeah, it's publicity. You're not really meant to put a shred of faith into any of it. Moving on.

10. Pearl - This is a decent enough song but I don't think we should be winding down in the album at this point. See last paragraph. Nuff said.

11. Hummingbird Heartbeat - This sounds like a lost, toned-down Lady Gaga song. I can imagine Lady Weirdo's monotone going "hummingbird heartbeat, hummingbird heartbeat" to some Casio-beat crapped out by RedOne. Additionally, how can the "taste of your honey" be "so sweet" when bees make honey and have nothing to do with hummingbirds? I mean, she mentions bees once but then why even involve the hummingbirds? Yeah, yeah, I know. I'm reading too much into this.

12. Not Like The Movies - I either so moved I have no reaction or I'm so bored I'm paralyzed. Frankly, I can't decide how I feel about this song. It's definetely one of those "hey, this album's ending. Here's a real slow song for ya." Except I don't think it's all that good. I'd rather have this gone and "Pearl" here instead. Now that's a good album ender. That song's telling you "Hey, did you put this album on repeat because 'Pearl' is playing?" The song that ended up at the end says "Hey, I'm ending. Time to put something better in!"

"Teenage Dream" has some keeper songs and I've heard worse pop albums that this. Too bad it feels like two EPs were smushed together with a couple of reject tracks tacked on the end as filler. Replace a few tracks and slap better lyrics on a couple others and it could've been a five acorn album.

Four out of five acorns.

And..., so it doesn't go unsaid, showing that much skin on the album cover wasn't even necessary. It doesn't even look sexy as much as it looks smutty. "I gotta sells my album." That cheap, two-seconds-in-Photoshop-later smear over her ass doesn't really help any either.
Posted by B E C K at 2:02 AM