Dinner for Schmucks: a movie for dicks 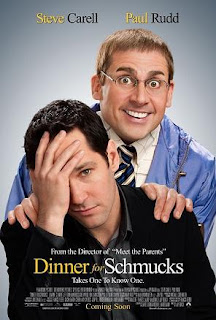 I'm not completely adverse to movie remakes either. Really, I'm not. It's always interesting to see a new spin or take on something, especially something good. I think Veber's film was ripe for a remake. I realize changes must be made when something is redone, but I swear Hollywood has the annoying knack of changing the wrong goddamn thing.

1. Why the hell did we ever make it to the actual dinner? That's never what it was truly about. Is it just an excuse to parade out all of the freaks. No thanks. By throwing in all of these other idiots, doesn't the film thereby make us a guest at the Dinner Game, laughing at these poor fools' expense and thus ruining the entire point?

2. Production Budget: $69 M. For a movie about rich guys who invite idiots to dinner? And actual people shelled out $69 million bucks to make this shit? Those people deserve to die.

3. A neat and tidy Hollywood ending. In fact, it seems they went and gave out as many happy endings as possible. The original ending was happy enough: Shit just kinda leveled out and the characters were left with a double-edged gift of personal insight. In Schmucks there's a marriage, a new relationship, and a host of other sappy stupid-ass shit. Then the appointed villain is labeled a "loser", which again missed the fucking point of the original. The fact is that the main guy in the French film gets screwed over so badly because HE DESERVED IT. That was the idea. He has everything, doesn't play fair, is a cheating, lying jerk who wants to humiliate an idiot. But the idiot he chose is the embodiment of divine karma. He's a good-hearted innocent who doesn't mean to do anything bad. He's just that goddamn stupid.

4. Crass, stupid American humor doesn't amuse this crass, stupid American. American comedies are more miss than hit for me. I've never laughed at Friends, the Office, and I maybe tittered once or twice at Seinfeld. I avoid any comedy film more recent than circa 1990. I saw two minutes of "There's Something About Mary" and knew I would not be enjoying American comedy again for years to come. I used to get some chuckles out of Family Guy but honestly that show now disgusts me. More so for being stale and trying to constantly push an envelope that has long since been torn in half, burned, and shat on, but I digress. To quote a review, "Dinner for Schmucks offers gags involving gonorrhea, the clitoris, pompous modern artists and public humiliation." EWWWWW, WTF? Additionally, making matchstick landmarks isn't edgy enough [never mind that it wasn't supposed to be!] so they make the idiot play with dead mice instead. This is what constitutes a joke these days, folks: STDs and dead animals. No thanks, keep it.

5. My God, the damn poster. Just scroll up look that that effin' thing. To exasperated Rudd's douchetastically palming his face--facepalm doesn't work when you LOOK AT THE CAMERA--to Steve Carell's smug, bug-eyed "I may or may not be a pedophile who just peed in your swimming pool" crazy-stare, this poster induces so much rage I want to poop in your mother's purse while she sits in church.

I'll take an old French comedy over this crap any day of the week and even some days that don't exist yet.
Posted by B E C K at 2:49 PM