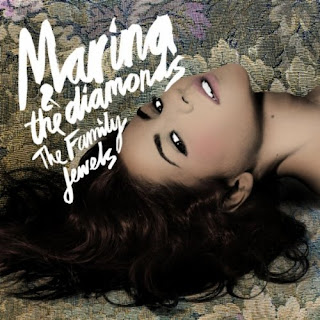 One of my new favorite artists to emerge in 2009 has to be Marina Diamandis. Yes, she's a solo artist. "The Diamonds" are supposed to be us the fans or something. This year marked the release of her debut studio album "The Family Jewels". Her songs are quirky, upbeat and downbeat at the same time. I know I will fail to write adequate praise. She strives to be as different from factory-churned pop as possible in both sound and lyrics. In that respect she's similar to the same message being sold by loads of pop-tarts except she actually is freakin' different. Marina has said "I'd prefer to have 10,000 intelligent, questioning, fans full of life than 10 million unthinking, colourless ones." This album is sure to fulfill that wish.

Marina is not singing rejected Britney Spears tunes and selling herself off as a rebel. She is actively rebelling in her lyrics and perhaps even more importantly in her sound. Marina hoots, chirps, yodels. I'm fairly certain she probably whistles and beeps too if you ask her nicely. Her tone is remorseful. Giddy. Affirming. Even a bit annoyed. Slightly perturbed. It sometimes reminds me of the audio embodiment of those sock-type things that pop out of the can. It almost doesn't seem congruent. You just have to accept it the same way you accept Goofy and Pluto are both dogs, yet one lives in a people-house and talks and the other doesn't.

Even Amazon.com can't recommend anything close. It gives me Janelle Monáe, M.I.A., Dragonette, V.V. Brown, the Noisettes. It gave me Melody Gardot and tons of bluesy types I have no real interest in listening to. Maybe La Roux comes close to the same category. Maybe.

There's a deluxe digital edition at Amazon for $11.99 that includes a video for Hollywood, a digital booklet, and a handful of remixes. If you don't already own this album and are looking for a digital version, I suggest that be the version you buy. Track breakdown, non-deluxe style:

1. Are You Satisfied? - This one's kinda catchy with a drop of folksy and two more of electronic. Not my favorite, but goes well with the whole of the album.

2. Shampain - One of my favorites. I find I start singing it sometimes with no prompting what-so-ever. "Drinking shampain, to forget yesterday..." From what I hear, this is supposed to be her next single with vid forthcoming. Can't freaking wait.

3. I Am Not A Robot - This is probably the song that hooked me on Marina. It's practically an anthem even though you aren't going to go shout out lyrics at any party. Or maybe you would. I guess it would depend on the party. GUESS WHAT!? I AM NOT A ROBOT!

4. Girls - Makes fun of those shallows chicks we all went to school with. You know the ones. All they say is na-na na na-na.

5. Mowgli's Road - Holy crap, just go see the vid of this. This song is like Sussudio in that it's so effin' cool and I have no godly idea why. Seriously. It has a message. The message is there. But what are the ten silver spoons all about? Do I not read enough? Is it bad I don't care? Also, I tend to favor the longer version of this. Just saying.

6. Obsessions - I remember when this was lighting up music blogs every where. It's a nice song.

7. Hollywood - I LOVE this song but the extra verse in the album version kinda gets a shake of the head from me. I think it kinda throws off the rhythm a bit. Well, the shorter one should be easy enough to find somewhere. Otherwise, I'm all over this one.

8. The Outsider - "...cause I'm a FUCKING WILLLLDCARD!" I notice reviews either love that line or hate it. Frankly, I wish Marina would do more of them.

9. Guilty - This is another fave. It has a pulsing beat and a haunting darkness about it but you won't go weeping into your closet because of it. This one, Shampain, Hollywood, and Oh No! are probably the ones I have in constant rotation when I play music.

10. Hermit the Frog - I really don't know what to think of this song. It definetely gets props on the title alone. For some reason, I feel like a stoner's band in the 70's should be singing this instead. Like I should be sitting back and lighting a joint. Except I don't do no drugs, son. Huh?

11. Oh No! - Her latest single from this album, I believe. I honestly never gave it much of a listen until the video came out. Then I was all "Duuude, why did I keep skipping this one. It's damn good." And now I play it too much. Oh yeah, and there's Oh No! specs, too. Didja know?

12. Seventeen - This is another one that I heard on the music blogs long before I even knew she was doing a full album. I distinctly remember downloading it and listening to it like 30 times that day. No. Rly.

13. Numb - This one's a little gem. I'd love to hear different artists cover it.

14. Rootless - Nice and slow. Like #1, I don't normally listen to it without having played the entire album. It's a nice cap off, just what I like when the album winding's down.

Go check out more Marina vids, like other music videos and such, on her YouTube channel: http://www.youtube.com/user/Marinaandthediamonds