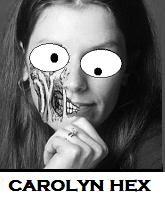 First off, Care Bear hugs and kisses to the Detroit Free Press. The Washington Post and some Dallas rag both wanted me to register to read Carolyn Hax. REGISTER? To read people crying about their lives? I think not.

Following letter and final letter both edited for superfluous bullshit:

Balance your attitude about check

Dear Carolyn: A friend agreed to keep my pet while I was away. I gave her a check when I returned simply because I appreciated her help. I told her I had postdated it. She cashed the check ahead of the date and the bank charged me $175. Her response: She hadn't heard me ask her to hold the check and she was really sorry. I believe she was not truthful and, even if she was, she feels no responsibility for sharing the expense. This woman is in a group that meets in my home. Because of this incident and another which has caused dissension in the group, I do not want to continue to invite her. What do you think?
--Anonymous

Dear Anon,
I think you have other motives for not wanting her in your home and just want to make a tally on this woman. If this had been someone you wanted to keep as a friend, you'd see the thing with the check was your own damn fault and eat the cost. There's a reason you're not supposed to write post-dated checks, you ninny. If you don't like the woman then don't invite her into your home. However, be prepared for the rest of the group to turn on you if they disagree. Especially if your other reason is as equally flimsy as this one.

Dear Carolyn: If a woman has dated both nice guys and abusive guys, how come you'll find out that in just about every case, her longest relationships have been with the abusive guys? Why do so many women require some form of drama to remain entertained in a relationship, and do you find this to be childish behavior?
--D.C.

Her longest relationship is with the abuser because if she leaves he'll fucking kill her. I don't know why you seem to surround yourself with women who LOOOVE drama and it's not childish, it's just sad. The End.

Of course Carolyn didn't answer this way and provoked the following response:

BECAUSE SHE'S AFRAID THAT IF SHE LEAVES HIM SHE'LL DIE. No, dumbass, I don't think non-abusive men would be in the longer relationship because the non-abusive man would be all "Oh, so this isn't working for you? All right, I can respect that," and then he'd go on his merry ol' way because he has a shred of self-esteem and isn't an effin' sicko. The abuser is a sad shell of a guy with serious issues who will guilt her and then give her a shiner. NORMAL PEOPLE DON'T REMAIN IN RETARDED SITUATIONS. SICK PEOPLE DO. See the fucking difference, sportsfan?

Instead Carolyn and her readership BAAAWW about sterotypes. Since this guy is too stupid to understand how abusive relationships work, they may as be trying to teach a donkey calculus. They dub him as having "Nice Guy Syndrome". Why is everything a disease these days? Why can't a stupid person just be stupid?

He's having an affair, she can't be bothered to care

Dear Carolyn: My husband is having an affair. I have proof. I'm not surprised; he was texting her while we were on vacation with my family. I have not confronted him. I'm expecting him to say, "Well, can you blame me?" He has asked to go to counseling. I have agreed and told him to set up the appointment, but he has not. Sadly, I'm not really bothered, but if it begins to affect our children, there will be hell to pay. I have several e-mails over the past six months, including one where he calls my family pathetic. That bothers me more than the affair. I'm sure he thinks I am unaware. The immature part of me just wants to say "gotcha." Should I wait for counseling to bring this up so there is a witness there?
--Aware But Don't Care

2. Why haven't you confronted your husband? Even if he does act as predicted, WHO FUCKING CARES. PAST SIX MONTHS? WTF! Get up off your ass.

3. Why didn't you make the appointment with the counselor? Why is the marriage counseling just HIS deal? Do you want a prize for just agreeing or some shit? Well, you don't get one.

4. Your children have noticed something. Don't front with this mamma bear bullshit: "If he hurt mah keedz, thar be hell ta pay!" If you don't think your own behavior in this doesn't hurt your kids, think again. I grew in similar circumstances and IT HURT ME BADLY. I'll bet your kids are feeling it, too.

5. "Boo hoo, he called my family pathetic." The fact that this bothers you more than the affair itself is icing on the cake. And then you want to gloat "gotcha" and want a witness? Name calling and bragging rights? You have all the priorities of a five-year-old in front of the claw machine at Chuck E. Cheese. 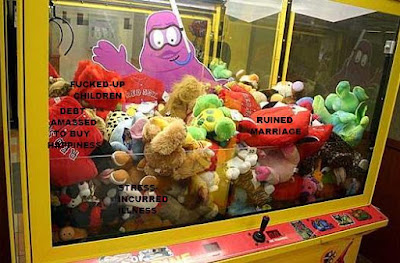 WOW, and he cheated on you. I can't imagine why.

Look here, missy, you can't control him but of the things you could control—confronting him, making the appointment, etc.—why haven't you done them already instead of spending your time being a petty, over-prideful little plotter? A mother concerned with protecting her children from this crap doesn't just twiddle her thumb up her ass and proclaim herself "aware but don't care." Whether the lout thinks you're aware or not is utterly meaningless. "Should I wait for counseling to bring this up so there is a witness there?" You mean the counseling that will never happen since neither of you can pick up the goddamn phone? A "witness" for what exactly? "Oooh, you got him good, gurl!" Will that fix your marriage? Um, NO! Confront him already. It's the first step.
Posted by B E C K at 3:39 PM