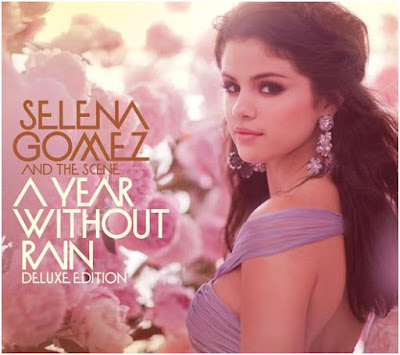 Before I commence with teh reviewin', anyone else want to see Selena's second album as "A Year Without Brains"? Selena up there could be decked out in zombie make-up and the album could feature groovy ghoul-theme dance tracks. We don't have enough mainstream Halloween music. It would've been released in time for October and it would've been rad. But what we got instead is good, too.

1. "Round and Round" – The song comes out a little formulatic but as I made myself listen to it again for review, I found myself kinda humming it. Not a favorite by any means, but very radio-friendly.

2. "A Year Without Rain" – The eponymous track. I think I'll prefer this one remixed. It's a sweet song but I think it could use some punch. I'm listening to it again and it does kinda grow on you.

3. "Rock God" – A song about a rock god should rooooccck. Period. This struts along and is very much in the pop, wanna-be-bad-tee-hee-imma-girl vein of Miley and young Avril. And that's kinda ew. This would've been cool as a duet with Orianthi singing and crunching guitar. Yes, I do keep bringing up Orianthi whenever possible. I want more Orianthi.

4. "Off the Chain" – Much like "Rock God", it's too mellow and soft. A sassier voice like Katy Perry (one of the co-writers of the song actually) or Kelly Clarkson would've suited this better. Oh damn, now I really want Kelly Clarkson to cover this. Additionally, the background music needs to be bit more uptempo.


5. "Summer's Not Hot" – This sounds great and you can jump up and dance to it, but it doesn't sound good for anything besides a tween's pool party. One of the writers on this was RedOne. Perhaps someone should've gotten her to perform like GaGa. That would have been more interesting.
6. "Intuition" – Featuring Eric Bellinger? Who is that? He's attempting to rap and sounds kinda Bieberish, like his ballsack hasn't dropped yet. Autotune is also really showing its stuff on Selena's voice… More on that next.

7. "Spotlight" – Yeeeeah. It has a good beat but I don't like her autotuned this freakin' much, especially when nothing special was really accomplished by doing so. Then Selena's voice actually Ke$has out. No no no. Also, she name-dropped Angelina Jolie. *KRUSTY GROAN*
8. "Ghost of You" – Boring. I didn't hate this. It seems like one of those that needs to grow on me.
9. "Sick of You" – I actually like this lyrically but it's nothing special. And Selena's hissing. "Ssssss, so sick of you!" HUH? Why you hissing, girl? I really want to love this song more than I want to care for it.
10. "Live Like There's No Tomorrow" – See #8. I have the suspicion this is better live somehow. The Scene part of the group should've shone in this track—and the previous three for that matter—since the electro-pop nature of this album eclipses them. The last few tracks here were putting me to sleep.
11. "Round & Round (Davé Aude Mix) – In making this more club-friendly, the appeal of the original is sorta gone. I like this a little less than I did the original.
12. "A Year Without Rain (EK's Future Classic Remix – Radio Edit)" – Ohhhh, I do love this. Yes, this song is definitely something ppl need to remix the heck out of. Lovely.
13. "Un Año Sin Ver Llover" – For those of you who don't understand, that's "A Year Without Rain" in Spanish. I actually don't speak Spanish but, hell, I know what año (year) and sin (without) mean so it was a matter of context logic for me. I gotta say I prefer it in Spanish. Makes it more romantic I guess. I don't remember where I read it, but I'm fairly certain Selena doesn't actually speak Spanish and is in the process of learning it. Good on her. I hope she does more Spanish-language songs in the future.
Overall, I like this much more than Selena Gomez and the Scene's first album, "Kiss & Tell". I really only cared for "Naturally" on there. While I definitely like more than one track on the sophomore album and dig the electro-pop vibe, a bunch of them could've been better executed.  And getting the Deluxe Edition is the only way to go here.