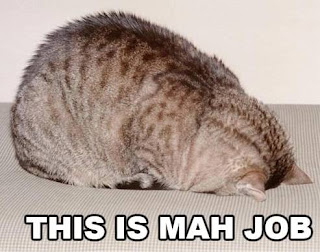 So the economy's really balls right now and a shitload of us--myself included--are looking for jobs. It really is an employers' market and I'm getting real bitter with some of this bullshit:

♦ Job fairs. Good lord I hate them! Half of the booths there are always for scam schools, fast food, or the military. Yeah, right. Me and thousands of others went and got bachelors and masters degrees so we could go to Career Point or flip a burger. I went to a job fair and they were all "bring multiple copies of your resume", so I ramped up that shit and printed loads. Nobody would take one. WTF. The job publications in the newspaper are just as shitty.

♦ Ugly inefficient websites. Because everybody wants you to apply online but few of them know how to do it correctly. One company split up all of their jobs into five different groups so I'd have to check five different websites for jobs. Oh, hell! Anybody use that Taleo thing? That thing's crap! No, I do not want to fucking choose my country, city, and state over and over again. More than one employer has listed categories i.e. "Finance", "Human Resources", etc. and all it does is fuck up my search results. If you only have fourteen positions open in the whole damn company, then you don't need twenty-plus categories to sort them!

♦ Horrendously long online applications. I swear, some of this shit takes thirty minutes or more. And sometimes they time out while you're filling them in! So I fill these out and then three weeks later, I get an automatically generated rejection notice or some shit. Thank you for wasting my fucking time. One company did this right: I filled out basic info and sent a resume. They replied they were interested in me and THEN sent me a link for a long-ass form. Weed out people first with a short form or resume before you waste someone's fucking time.

♦ Filling out a paper application when you've already done an online one. WTF? Is it Backwards Day? This has happened so many times and I wonder just what the fucking problem with their printer was. Print that shit. Why the fuck are you making me do this crap OVER AGAIN? I went to this one interview and I had already filled out an online application AND had a phone interview. So at this stage, I figure it's a simple face-to-face because they already have my shit. Well, I get there and then they give me all of these fucking forms on a clipboard and an effin' pen: What is my name? Where do I live? My phone numbers, e-mail, job history, am I a U.S. citizen? What the fuck is this shit? Turns out somebody was supposed to send me a PDF of this stuff. So I could refill it out again? Why don't you just print out what I already filled in? If you have new forms for me, fine, but it makes no fucking sense to have a huge application for me to do online and then make me do it over again! You fail the internet.

♦ Fuck you and your experience. How is anyone supposed to get experience when nobody will hire the non-experienced? Twice I was asked if I knew Quickbooks. I said I'd learn it and they got all doubtful. Oooh, because I bet Quickbooks is so fucking hard. Look, just because some of you suits are shit with programs doesn't mean the rest of us are. The university I went to saw no need for Quickbooks or Peachtree, which I admit is a little dumb of them but it doesn't change that software is software! NOBODY should need several years or even months to learn any software when it comes to basic usability. 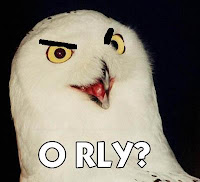 ♦ Promises to call me later go unfilled. You know what? You DON'T have to promise that. Just tell ME to call you back or something. I'm getting sick of "we'll call you" like we're gonna touch base or I actually have a shot at the job. False hope really burns my grits. They never call. It's almost always no phone call and a rejection e-mail instead. Everytime someone says they'll call me, I feel like going "OHHHHHHHH RLY?" and pulling that owl-face. I get it, you're busy. Then DON'T TELL ME YOU'LL CALL ME.

♦ Taking for fucking ever to decide. I was up for this one assistant position and I REALLY wanted it but I was gonna run out of money in like a month and needed work bad. They kept saying they would decide later in the week or next week and literally kept bouncing it around for a whole damn month. I was forced to withdraw myself from contention and take another job. These assholes knew I needed a job. Don't fuck around with people's livelihoods. Just make a damn decision. How do three people take a whole month to hire one entry-level person? HEY, YOU'RE DOING IT WRONG.
Posted by B E C K at 5:50 PM