I appear to actually be getting a tiny bit of traffic. If you have arrived here a confused, lost soul—or, well, whatever—let me clue you in. This blog has no fuckin' point.  It's just like any other blog on the internet. No more, no less. Who am I? Meh, doesn't matter. Now, if you like what you see here, that's fine. If you don't, that's fine, too, but you know what?  Leave.  You're totally allowed to, like, go and find like-minded peons who enjoy exactly what you enjoy.

For whatever reason, some folks actually stop and comment on shit all "I disagree with you.  I loved 'Tangled' and I loved the stupid, fuckin' dog-horse." or "'Scott Pilgrim' was a masterpiece.  Derrrrrr."  I don't freakin' get it.  If you love that shit, go make your own stupid blog about how much you love it. What do you think you're doing here: changing minds and changing hearts?  No, you aren't, dumbass. Guess what?  Five or so years later, I still fuckin' hate Tangled and the Scott Pilgrim movie. I will never, ever like either one. Even on my death bed—most likely ravaged by cancer because that shit runs in my family—my loved ones will ask for my last words and I'll say "Fuck Tangled.  Fuck the Scott Pilgrim movie.  Fuck Frozen.  Fuck that r@pe-fest Game of Thrones. The fucking end." "So what does that mean?" you ask. "I can't write a dissenting comment, you thin-skinned biatch?" Sure, you can.  You can write "you're an idiot" or "I luvvvvv Tangled" as much as you want.  But, you know, you don't get a prize.  And for all of my ranting, I actually stay on my own corner of the internet.  I will never invade your corner.  I will never go to a Tangled fanpage and be all "this movie suuucccks and here's why." So maybe not waste my time or yours spewing your shit and go find your audience, g'.

Now, yes, I do curse a lot. I find it colorful. I find it honest. I find it refreshing. Most importantly, I find it hilarious. And I enjoy a good rage. I go to too many "sanitized" places where I hold my tongue and obey other people's rules. And I'm usually pretty good at that. I've been banned once in my twelve-odd years on the internet at a CSI forum and, hilariously enough, I was being perfectly nice, on-topic, and not using any f-bombs because I totally loved CSI at the time. I can only assume I was banned because a snail like the one in my avatar killed their daddy and looted their village. 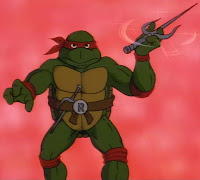 Additionally, I'm not trying to win prizes in English. Nothing here is for professional or academic purposes, so screw that noise. Yeah, I use "wanna" and "sho'nuff" in sentences. I'm cool but crude. That's right, I'm motherfucking Raphael. And that's strange since Donatello was my favorite turtle growing up. Because he did machines, yo.

Most of my posts are reviews though sometimes I'll just rant or make fun of advice columns because I fucking love advice columns. I review whatever I feel like, which has resulted in a strange combination of music, Harlequin romances, and cartoons. I rate on a scale of 0-5 and I use acorns instead of stars. For things I deem perfect, they get to be in The Five Acorn Hall of Fame. What does this mean? Nothing. Though if a squirrel comes to your house bearing a package, just don't be too surprised.

Diplomacy and eloquence are out of the window. If I like things, I curse and squee and throw in a zinger. If I dislike things, I curse and angrily squee and throw several zingers. If I love things, I kinda sit there and babble and then curse and angrily squee that I didn't say something better because, goddammit, I missed my chance. Then I throw myself a few zingers. As you can see there's not too much of a difference. It's pretty exactly what pops in my head so think of this as a blog with Tourette's, dammit DAMMIT!

Also, spoilers ahoy. I love spoilers. Back when "The Sixth Sense" first came out, my momma was all "Hey, y'all, I luvved the Sixth Sense!" and I was all "Oh, no! Don't say anymore! I hasn't seen it!" and she was "Guess wut, there was a surprise!" And thus I figured out Bruce Willis was dead when I never would've seen that coming any other way. I get spoiled that easily. My point? If I didn't want to give spoilers at all, I wouldn't even vaguely discuss whatever it was. There's no way I can write about anything while maintaining the element of surprise, at least where I'M concerned, so I have to go all the way.

WHAT DOES THAT BLOG NAME MEAN?

Yeah, I went ahead and nuked some posts.  Going through the blog again, I felt some posts were badly written and didn't want to bother to re-do them.  I'd like the majority of the blog posts to be reviews or write-throughs of some sort.  And as much as I liked ranting about what shitty movie Scott Pilgrim was, I have standards, too.  I guess.  Pfft.

My board, the Sphere, is linked at the top.  There's a guest forum where you ask for an account in the event you actually want one.  I was getting too many Russian spammers, so I closed shit up.
Posted by B E C K at 2:19 AM

Email ThisBlogThis!Share to TwitterShare to FacebookShare to Pinterest
Labels: Me