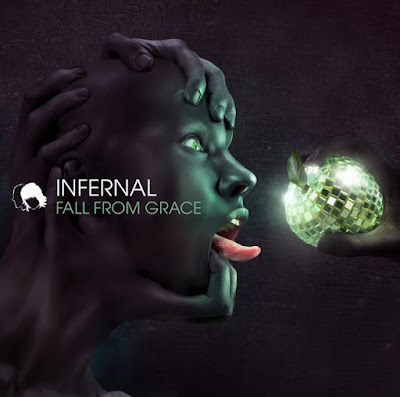 First off, AAAAAAAARGH!! AAAAAAAAAARRGH!!! OMG!! OH, GOD! WAAAAAAAAAAAH, THAT COVER, FTW! Congratulations, Infernal. If you were trying to give me nightmares, you succeeded.

This is the fifth album from the Danish dance duo, best known for their cover of "Self Control" and "From Paris to Berlin" from their third album of that name. The release in between, "Electric Caberet", didn't have any tracks that really caught my attention and left me a bit cold. "Fall From Grace" seems to be a return to form. I just plain like these songs better than on "Electric Caberet".

1. "Fall From Grace" - A lovely, slow start makes me want them to do more ballads. Works itself into a kicking track.

3. "Love Is All..." - The type of song where everyone in the club gets in a circle and holds hands. lol. Yeah. But it makes you want to do it. Trust me. Very nice.

4. "Weird How You..." - I like this one although I feel I've heard the hook for it somewhere before. Feel free to enlighten me. A fave of mine.

5. "Alone Together" - Similar to the last track in that I like it but I feel like I've heard it somewhere before. I wish I knew if/what they were sampling. Has a nice steady beat to it.

6. "Gunshot" - What, someone's shooting at them again? This one's all right.

7. "The Weekend And I" - I wish the backing music to this was on a better song. I'd love an instrumental version.

8. "Materialize!" - The robot from the last song stuck around for this one. More words would have actually helped here. A lot of repetition here and it doesn't really work for me. 's okay.

9. "Circussed" - I don't know if this is supposed to be a take off of "Circus" by Britney Spears but it almost sounds like it. Anything's a noun these days.

10. "Plastic Fantastic" - Decent but frays at bit near the end.

12. "Think Cavalli, Baby" - How avant-garde! I have no idea what the eff this is! There's speaking, a harder sound, and a notable absence of Lina Rafn's singing. This is absolutely wonderful. Too bad more the album didn't go in this direction and mate it with Lina's awesome voice.

"Fall From Grace" is better than their previous album and, although I loved the backing music on every track, there were still some weak tracks here.

And if that album cover and that last track don't produce sufficient WTF, here's the music vid for "Love Is All..."