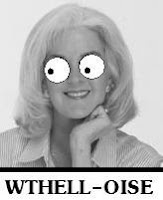 Dear Heloise: Keeping up with the housework is a challenge. I have three kids, both my husband and I work, and the house is a mess. So I came up with a plan for everyone to help. I wrote down each room on a piece of paper and placed slips in a jar. We took turns pulling out slips, and we cleaned whichever room we picked. If the kids don't do their chores, then they don't get their allowance. I still do the laundry and the cooking, but it is nice to have helped with everything else.

First off, what do you and your husband do for a living? I ask because I'd love to get a job where I can afford to live in such a huge-ass house that five people have to resort to picking from a jar in order to clean it. Since you still do laundry and the cooking, I can't help but think that your kids may be kinda young and you're just exploiting child labor. As much as eight year-olds need to be taught values of cleanliness, let's keep them cleaning their own rooms, picking up after themselves, and doing weekly vacuuming. You really don't want grubby hands cleaning where you prepare food or where you put your toothbrush.

Dear Heloise: When a bag of straws was opened, the straws would scatter everywhere when we tried to take one out. So my husband took a potato-chip can, rinsed it out and dried it, and cut a hole in the plastic lid. He added the straws. A quick shake yields one straw at a time. When we have straws left over from fast-food restaurants, I add them to the can.

You're old, aren't you? I mean, aside from going "HULK WANT STRAW!!" to the straw bag, for what other reason would the straws go everywhere unless you were an arthitic biddy? Unless you're a chronic masterbater but those don't typically write to Heloise. Anyway, don't be so cheap. Go buy a nice jar for the straws or something. I tend to reuse and recycle a lot of shit but I'd hardly use a chip can people were cramming their hands in for something that's destined for my mouth.

Dear Heloise: My teenage son has a cell phone. I always have my family check their pockets before they put their clothes in the dirty laundry for anything left in their pockets. Unfortunately, I didn't check his pockets first and washed his cell phone. To teach him some responsibility, I said he'd have to use his own money to replace it, which he did. Two weeks later, I washed my cell phone. Needless to say, I returned his money with a red face

Congratulations on completely negating your own lesson. You were trying to teach your son to be responsible for his own actions so he had to pay to replace his phone that was ruined by his own negligence. When the same thing happened to you, it meant it was up to you to replace the phone you ruined by your own negligence. What about that situation means you had to give him a refund as if admitting a mistake? This was another lesson for your son, showing him even authority figures such as parents make honest oversights and are subject to the same rules. And you fucked it up for him. It's not your job to check his pockets, it was his and he failed and ruined his property as a result. Doing the same thing yourself doesn't entitle him to shit.

Dear Heloise: We get several magazines a month, and I sometimes cannot remember which ones I have read. I usually pass them on to my mother after I read them. So I now put the initial "R" on the upper right-hand corner. It stands for "read," and I know that I can pass along the magazine.

You're old, too, aren't you? Assuming your mom doesn't cohabitate with you and this isn't a matter of taking them downstairs to her room, just toss in already read magazines into a box, bag, or basket by the front door. Then take it to her on your way out to see her. Not that it really matters if you deface a magazine but I like to get useless crap out of my way. Having a bunch of read magazines with barely discernable R's in the corner doesn't seem as effective as getting them out of the way.

Dear Heloise: I came up with this idea: I use markers, crayons, and other craft materials to decorate tissue boxes so they can match whichever room they are going into. After the tissue runs out, I use them to store things like hair accessories or cotton balls.

Wow, you must be really poor to only be able to afford plain-ass tissue boxes that actually need to be decorated. Even the generic ones I see at the store have some pattern on it already. And keep your cotton balls in the baggie. There's nothing worse than trying to clean off your nail polish or wipe off your make-up with a pair of dirty balls. Learn this now or learn it later the hard way.

Names were eliminated for the purposes of this post. I'm mean enough already.
Posted by B E C K at 7:45 PM