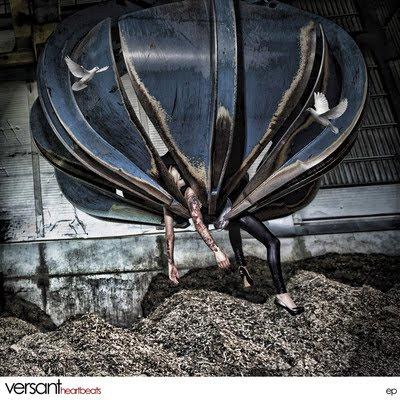 So I wasn’t the only one who cried when Carah Faye Charnow and the Shiny Toy Guns parted ways, right? Okay, so maybe cry is a bit strong. “We Are Pilots” was brilliant and I don’t think it was until she was gone that I had that much more appreciation for her voice. While I like the new STG covers of “Major Tom” and “Burning For You”—“Season of Poison” quite less than that—I can’t help think of what could’ve been with her magic voice. But now to what is...

Post-Guns, she is now part of Versant with guitarist/keyboardist Daniel Johansson, drummer Richard Ankers, and bassist Nicholas Oja. From I understand, they are based in Sweden and we know really cool shit comes from Sweden. Versant's first release is this four track EP, "heartbeats ep". Prior to the release, a couple of the tracks--"Push Away" and "Out Of Touch"--had been floating around as demo versions for quite some time. Both tracks were just what myself and others expected to find with the next STG album. Of course, I loved them and had to have them in higher quality. Yes, yes, I'm aware I keep bringing up STG in this post but if you loved the crap out of "We Are Pilots" like I did, you are gonna freakin' flip for this EP. All four tracks are great and it's less than $4 at Amazon. So move yer ass.

And just for the hell of it, here’s some ABBA goodness they did. Fast-forward to 0:55 to get to teh music.