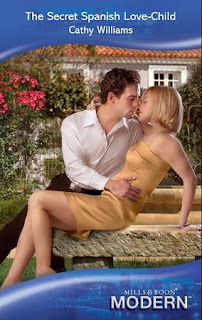 New boss-love-child scandal! When plain-Jane Alex McGuire indulged in an innocent flirtation with a staggeringly perfect stranger, she never expected their paths to cross again. Meek and dowdy Alex was the ideal distraction for Gabriel Cruz in his heady playboy days- But, since running the Cruz family business has beckoned, frivolous distractions are a thing of the past- So on Alex-s first day of her new job she not only finds her perfect stranger is her boss-but she must tell him that their short affair left a lasting impression!

Maybe I'm just old fashioned but "an innocent flirtation" is hardly what I call knocking boots with a "perfect stranger". This book's author is Cathy Williams and I've never read an ending by her that I've liked. That being said, a handful of her books have still made my favorites so I gave this one a shot.

Williams seems to be geniunely trying to do something a tad different from other Harlequins. She uses unconventional heroines. She had the heroine marry the hero and forget about it. She had a heroine paying an unannounced visit to the hero and not for the expected "pregnancy surprise" reason. So I appreciate what she's doing.

I had so much hope for this book and not by the title. The title, like the cover, is a mess. Get a load of it. Not an official Harlequin one, but they all use the same Mills & Boon artwork. Never mind that the chick in the book is described like Jane Wiedlin. WTF? One of the few times we get a heroine without Titian curls or a "silky curtain" of blonde hair and they still muck it up. Also, that guy looks skeezy.

Our heroine is Alex McGuire, a tall, Irish, boyish, horse-like (heh, don't ask) spitfire of a woman with a dark pixie haircut. Our hero is Spaniard Gabriel Lucio Cruz, described as a "billionaire whizz-kid" by the press. Don't let this fool you, he's not self-made and he's thirty. Gabriel owns the London firm Alex works in although who knows what business he's in. It doesn't matter.

Years ago Gabriel had posed as a local and had a little fun with Alex. When she got serious, he disappeared and left her with a one-way train ticket to dumpsville and a bun in the oven. Oops. Therefore, the "secret love-child" being a secret in the first place IS ALL GABRIEL'S FAULT. Gabriel completely lied to Alex and she couldn't FIND him to tell him about the baby. Thankfully, we are pretty much spared but the barest accounts of this history.

Alex is brought up to Gabriel's office to translate for Gabriel's English-impaired spoiled fianceé Cristobel. Alex goes into immediate denial and can't believe the rich bitch Gabriel was her dirt-poor loverboy Lucio. Gabriel also recognizes her. He calls her back to his office later and cruelly gets the truth of who he is out in the open. When he shoots himself in the foot and says that Alex will be regularly catering to Cristobel, Alex tells him to stuff himself and her job. Yay for cajones.

Alex doesn't tell him right up front he has a kid. Though part in selfishness, Gabriel DID completely lie to her among a host of other reasons. Gabriel quickly condescends to feel guilty for Alex's speedy resignation and seeks her out. She declines the offer to return to her job and suddenly decides to introduce Gabriel to their son Luke instead.

Gabriel offers Alex a marriage of convenience and she said HELLS NAH. That was awesome but unfortunately Gabriel just plain doesn't mean it when he accepts no as her answer and has zero respect for Alex's decision. He never seems to grasp how appalling it was for him to suddenly dump Cristobel, coldly offer marriage to Alex, or even how traumatized Alex may feel to find out the great love of her life was "a piece of innocent fiction."

In fact, Gabriel manages to constantly feel inconvenienced, bothered, and ruffled that his magnanimous generousity, a.k.a. Gabriel trying to buy himself his own way, is rebuffed. Instead of bringing him crashing down, Alex weakens to him instead and her behavior comes off more like an idiotic ruse. For all of his rudeness and arrogance, sexy Gabriel still gets Alex hot all over. EW. At one point, instead of finding another place to sleep or calling the hero out on his crap, Alex climbs into bed with Gabriel who of course sleeps nude. Then she shrugs, tosses her prior values and characterization out of the window, and goes "Well, why not?" No really, it actually says "Well, why not?" in the book. And I rolled my eyes and pretty much gave up.

The book hastily degenerates back into standard fare, like Williams's editor shook her and reminded her it needed to be a piece of crap. Alex accepts a second offer for a marriage of convenience for really shitty reasons. She then manages to act secure enough to trust Gabriel and then flips her shit when she sees a picture of him and Cristobel. This didn't make sense seeing how Gabriel never portrays himself as anyone to be trusted. He hadn't declared any love and they had barely made any sort of progress besides the kind below the waist. Alex, I am disappoint.

Additionally, Gabriel never answers for his behavior and probably grovels for about a single page. This doesn't cut it. He was given everything in life. His parents are happily married and stable. He's had no great traumas or troubles. Yet, he was turned off of marrying for love since his employees had failed marriages because his company, like, worked them too hard or something. WTF? I don't even have the words for that. When Luke was conceived, Gabriel jerked around an innocent eighteen-year-old Alex for his amusement. And for all of his talk of how he dodged a bullet by breaking up with Cristobel, you wonder how Gabriel would be so blind to all of her ridiculously numerous faults in the first place. Maybe if he were in love or lust or even under pressure to be with Cristobel in particular, but none are those are the case. He really had a lot to make up for and he never does.

Four acorns for the first five chapters, one for the rest. Averaged for two and a half.