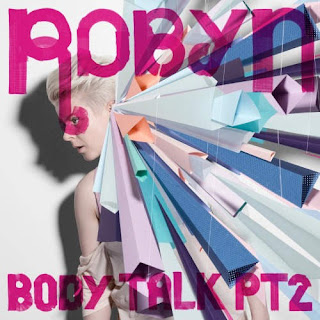 Okay, I’m not a huge follower of Robyn or anything. I just discovered her for myself last year and I likes me some Cobrastyle. However, I honestly didn’t care for “Body Talk Pt. 1” in the least other than for Fembot. The entire thing just bored me. The second in the Body Talk series is a different story and shows my bias for club-friendly Robyn beats.

1. In My Eyes – This kinda has this 80’s synth sound like I’m out driving with Don Johnson and we’re inside a neon tunnel. I dig it.

2. Include Me Out – “Just don’t include me out.” Meh, I don’t get it either. The song’s nice tho. It’s gotta a cool, steady beat. Kinda more something I’d expect Selena Gomez to sing for a made-for-television Disney movie, but Robyn still pulls it off.

3. Hang With Me – This song’s only crime is sounding too much like Handle Me. Namely where she all “haaaang with me.” I was all “Wut, she redid one of her old songs?” I like it but I wish the “haaaaang with me” part was different. This one is the first and apparently only single off of Body Talk Pt. 2. Not the right choice in my opinion. Might check out the remixes sometime. Maybe I’ll like those better.

4. Love Kills – I think this one’s one of my favorites. Think it probably would’ve worked better at a bit shorter. Hey, remixers, how ‘bout mashing this one with the Queen cover of the same name by Little Boots? Huh, huh? 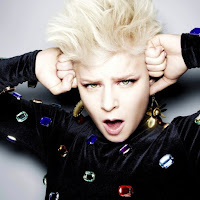 5. We Dance To The Beat – Steady, electro-background fodder. Reminds me of a mellower Crystal Method. Not bad.

7. You Should Know Better (featuring Snoop Dogg) – Oh, Snoop. First Katy Perry’s album and now you’re invading Sweden, too. Why must you plague me so? For what it’s worth, Snoop meshes much better with Robyn's track than he does on Perry’s.

8. Indestructible (Acoustic Version) – Absolutely lovely! Completely different from the entire album, just sounds sweet and beautiful. I guess the non-acoustic, regulareese one will be on "Body Talk Pt. 3"?

9. Bad Gal (with Savage Skulls & Douster) – This is actually available as an iTunes bonus track. Fuck that. iTunes. Bleh. Go get it here while you can. Or here along with the Crookers remix. It’s also available on Savage Skulls & Douster’s EP Get Rich or High Tryin. Nothing special, really. No loss if you don’t have it. It’s about one minute of Robyn versing and three minutes of “uh-oh”. Uh-huh.

I was gonna give this less than five but that felt like adorable criminal intent. A solid five for you, Robyn.