I ♥ MARINA. Really. You already know I do. Her music's awesome enough. Her general outlook on life seems to be ALLLLRIGHT. I mean, that girl's got her head on straight. And her vids just get more and more brilliant.

Finally we have the vid for her fourth single, the wonderful Shampain. I feel like I've gone back to the 80's, where I felt safe and warm and "divorced" was something other people's parents did. Is it the font at the beginning? The simple, subversive message of it all? The trash-girl ode to Thriller? Pity there's no leg warmers or windbreakers in sight. A++, thumbs up, and pots of acorns abound for Marina.

I notice on YouTube for Marina's vids that Lady Gaga always comes up in the comments. WHY? Hey, I enjoys me some Gaga, don't get me wrong, but I don't see how one relates to the other. Gaga's outlandish in a flashy, trashy celeb way and Marina's outlandish in a quirky, real-person way. So they're both kinda odd in their unique ways but that's about it. 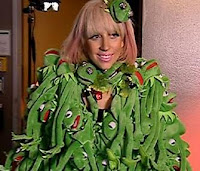 Gaga's kinda like a fun, slutty space alien. Everytime I see her in interviews, she always seems like she's high. Not that it has to be drugs, hell, she could be high on life or whatever, but she never looks all there. Plus, she's over-publicized like hell. Marina actually seems like an accessible and relevant human being. And Marina's cute. There's nothing "cute" about Gaga. Except when she was in that Kermit outfit, okay. But the Kermits were also, like, dead so that's kinda less cute. Also, I'd like to think Marina would respect Seinfeld's box and would save that finger for special occassions. Just... sayin'.
Posted by B E C K at 2:43 AM

Email ThisBlogThis!Share to TwitterShare to FacebookShare to Pinterest
Labels: Music